I'm sorry, but it's impossible for me to listen to these English newcomers without hearing the indelible mark of post-punk founders the Cure. I'm afraid what we have here is just the latest example of a U.K. band appropriating the sound of one of America's best. This is one bloc party RTC will not be attending — and I don't care if they are serving hamburgers.

He doesn't like Cat Power either. Here's a picture of Bloc Party from SXSW... 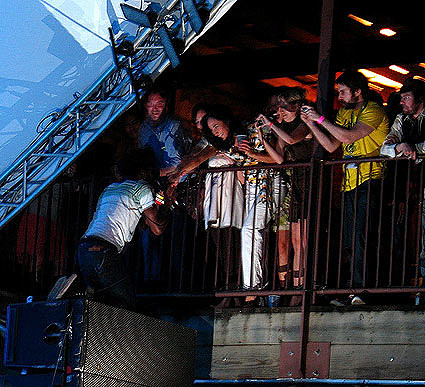 In just a couple of days Bloc Party will be here in NYC, and people that don't already work or live there will be venturing to 175th Street (United Palace) for the first time. Bloc Party will also make an appearance on Letterman while they're here, and they'll be back in the area in June to play Asbury Park and elsewhere.