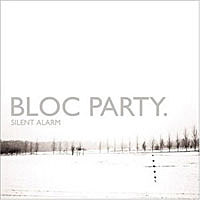 Bloc Party's new album, 'Silent Alarm,' will be released in the U.K. on February 14th. We here in the U.S., have to wait until March 22nd (to buy our copies).

The buzz in blogland is already that Silent Alarm will likely be one of the most popular records of the year. Decide for yourself. Stream the entire album.

Bloc Party aren’t just hoping, they’re trying. Maybe it’s over-long at 13 tracks but that’s just us being picky. ‘Silent Alarm’ is the unpigeonholeable soundtrack to 21st-century life as a cast-off. In a world of posers, fakers and bandwagon-jumpers, Bloc Party are unquestionably ‘4 real’. They never shy away from showing their truest feelings, even if those are of vulnerability or weakness. It’s this honesty which has spoken to people and will speak to a hell of a lot more when ‘Silent Alarm’ rings out beyond the desks of music journalists.

Preorder Silent Alarm from Insound. (or from Amazon UK for those overseas)
(the first 50 Insound pre-orders will get a free UK CD single)

Another review @ Drowned in Sound