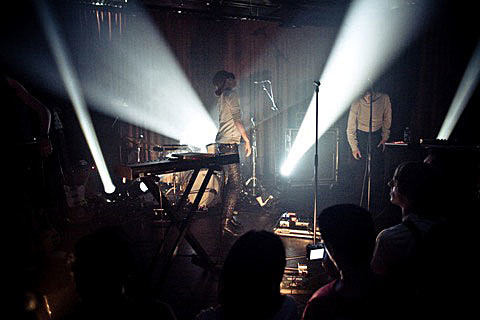 "The evening will go something like this. You'll arrive at the Tribeca Grand on September 7, and enjoy complimentary beer from Williamsburg's own Brooklyn Brewery and Elevated cocktails by Tequila Avion. An hour(ish) later, Kazu Makino and twin brothers Simone and Amedeo Pace--Blonde Redhead--will take the stage, filling the intimate space with their dream pop sound. After the show, you'll attend a private party with the band and the members of their guest list. The entire evening has been designed specifically for Gilt City."

And Gilt City was where you could get tickets for $80 each.

A more affordable option would be grabbing a ticket for the band's November 3rd Webster Hall show where you also get an opening set by Pantha Du Prince for your $30 (but no free beer).

Blonde Redhead's new album Penny Sparkle, out September 14th via 4AD, is streaming in full at NPR NOW. Grab "Not Getting There" as a free download above. Check out the band performing "Here Sometimes" (a 4AD Session), along with updated tour dates, below...