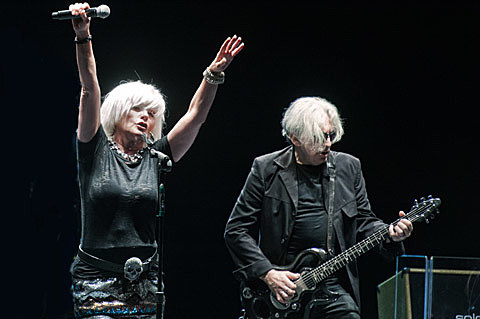 This past Sunday's Grammys telecast is behind us, but another televised event that will have a ton of Americans in front of their TVs happens this Sunday (2/2): the Super Bowl. A bunch of NYC-area concerts have been announced for the weekend-wide celebration, and since we last spoke, even more have been added.

NYC punk/new wave legends Blondie will play a FREE show at the Super Bowl Boulevard Concert Stage on Saturday (2/1). The stage is located in downtown Manhattan at Broadway & 40th Street, and Blondie go on at 8:30 PM. Blondie are also set to speak and perform at SXSW this year.

Jay Z (who performed and won an award at the Grammys) is also playing a Super Bowl concert. His happens on Saturday and is an invite-only DirecTV party.

Howard Stern's 60th Birthday Bash happens Friday (1/31) at Hammerstein Ballroom at 6 PM and will stream on SiriusXM. Jimmy Kimmel is hosting the event, and guests include Louis C.K., David Letterman, Sarah Silverman, Jon Bon Jovi, John Fogerty, Steven Tyler and others. Hopefully if you're there you'll get to see Steven Tyler dance again.

Meanwhile, catch Louis CK and the Arctic Monkeys on the Late Show with David Letterman tonight (1/27).