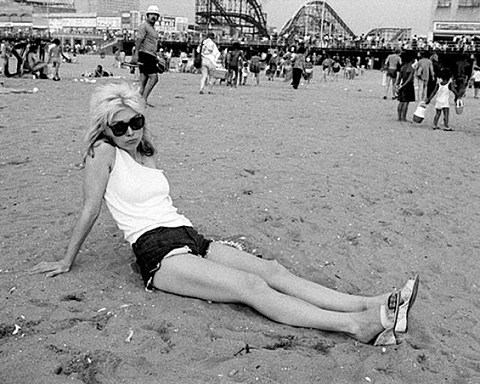 The Blondie 40th anniversary celebrations continue with a photo exhibit curated by Jeffrey Deitch on display from September 23-29 at Hotel Chelsea's Storefront Gallery ((222 West 23rd Street) from 1-8 PM. They'll be showing photos, like the one above (via Gothamist), from photographers such as Bob Gruen, Annie Leibovitz, Roberta Bayley, Mick Rock, Robert Mapplethorpe, Bobby Grossman, David Godlis, and Blondie's Chris Stein.

A few of Blondie's members are busy with other stuff too. Current and longtime drummer Clem Burke is playing in the supergroup The Empty Hearts who have a new album and upcoming dates, and is also in The Split Squad. Former bassist Nigel Harrison will be backing The Rua on their upcoming album and at CMJ, along with Portishead/Radiohead drummer Clive Deamer.

And Blondie's not the only artist being honored with a photo show in NYC. Stevie Nicks is too.

Blonde also isn't the only veteran CBGB band celebrating a 40th anniversary this year. Ramones are too.