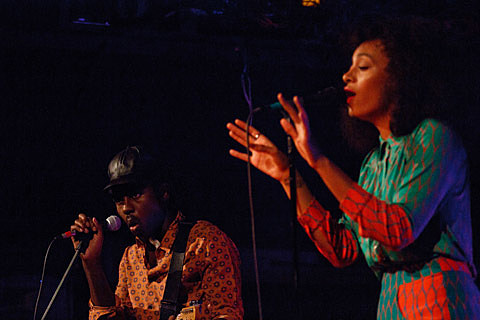 One of the more obvious Reese's Cup pop moments of the last year or so was Solange's "Losing You," a song co-written and produced by Blood Orange's Dev Hynes. Dev did the same for her mini-LP True, played in her band on her tours and seemed to be having a great time doing so. But the issue of credit began seeping in earlier this year. As detailed in a recent Fader feature on Hynes, Solange had been upset at being refered to merely as "vocal muse" in many reviews; Dev maintains that "Losing You" was written before they started working together. From the Fader article:

At a show in a Chinatown boutique in September, an overpacked crowd turns up to see a rare Blood Orange performance with a full band. Hynes, in a long coat and leather kufi, takes off his jacket to perform "Bad Girls," one of the songs he wrote that Solange re-recorded for True. Then, before launching into "Everything Is Embarrassing," Hynes gives a brief monologue, oddly compelled to footnote a song he created: "I've got a lot of shots ready to be fired, and I guess this is the shot. This is a song I wrote for another singer. She said a couple weeks ago that she doesn't like when I say I wrote it--this happens a lot to me, but I'm not an arrogant guy. That said, I've written some songs for people and they haven't given me due credit and it pisses me off."

More shots were fired yesterday via Twitter from both parties, and while both Solange and Dev's tweets have since been deleted, Stereogum has the transcripts, in paragraph form. Via Dev:

If you wanna take shots at me text me call me talk to me in person but don't ever drop a subliminal, talk behind my back, or send a flunky. I'm doing myself. Ain't nothing to do with anyone else, I'm about myself, like any self respecting human should be. We live & die alone. I have beef with no one. I won't even mention your name ever again. Any of you. I've said my bit. I've reached out. I've praised you. But now it's done. It's over. We're done. Bye.

Dev's didn't mention anyone by name, but Solange @'d him with these:

When you do tumblr post, speak about things in interviews, tweet, issues then belong to the public. I have been minding my biz. I have only ever praised you and spoken about you positively, even when our perspectives were totally different. I still support your artistry & am extremely happy for your success. I just wished you were honest about the making of my album. That's all I'm going to say on this. You know more than anyone niggas love drama. Also u know very well I have reached out. Bless. Ps: Your phone been going straight to VM for long time.

Let's hope they can work things out (maybe not on social media) because they do make good music together.

In very related news, Dev shared thoughts yesterday via Twitter on Jay-Z's partnership with Barney's. These tweets are still up, here in strung-together form:

The biggest 'Fuck You' in history could have been Jay-Z saying NO to Barneys. I'm a big fan [of Jay], of course, who isn't? But just looking at it from the perspective of someone that has had racial abuse in my life. It's cool that all proceeds are going to charity, that's great! But now Barneys, an already rich company that could be charitable anyway... get a cosign and an easy route to redeeming their name. None of the parties involved need more money. They NEED less.