Blood Orange at Bowery Ballroom in 2011 (more by Ryan Barkan) 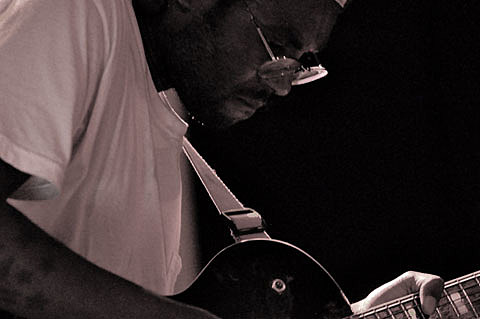 Blood Orange (aka Dev Hynes) has a few dates scheduled for this year, including a few in NYC. The first is a benefit for LGBT rights organization Human Rights Campaign at Le Poisson Rouge on May 4 with Creep, MEN (the JD Samson one), Light Asylum, Nina Sky, and "surprise special guests." It's being hosted by Amanda Leigh Dunn and Becka Diamond is DJing. Tickets for that benefit are on sale now.

A few days later, both Dev and Creep will be headed to Glasslands on May 9 for another benefit: the previously discussed fundraiser for Benjamin Curtis of School of Seven Bells, who is battling cancer. Dev is DJing at that one and Creep is playing live. Plus, Exitmusic and Rewards are playing live, and Albert Hammond Jr. and Certain Creatures are DJing. Tickets for that one are still available.

Blood Orange will do a third NYC date a few days after the Glasslands show when he opens for Phoenix (whose single, "Entertainment," he recently remixed) when their tour hits The Apollo on May 13 for a sold out show. Phoenix's tour also includes a larger, not-sold-out show on October 2 at Barclays Center with The Vaccines (tickets). Phoenix's "Entertainment" was also just given the remix treatment yet again, this time by Dirty Projectors. You can download that above or stream it below.

After the NYC dates, Blood Orange doesn't have anything scheduled until Pitchfork Festival. All dates are listed below...