photo: Bloodiest at Saint Vitus in 2011 (more by Fred Pessaro) 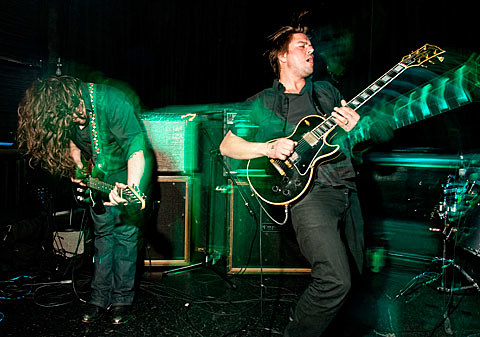 The always-interesting Chicago sludge experimenters/post-metallers Bloodiest have shared "He Is Disease" from their self-titled album, which is out January 15 via Relapse. One of the groovier outings in Bloodiest's catalogue, "He Is Disease" chugs and lurches through its running time with a jackhammer of a central riff, eventually exploding into the noisy chaos that is their stock-in-trade. It's a killer, and you can stream it below (along with two other already-debuted tracks from the album).

Bloodiest (which features Bruce Lamont of Yakuza and Colin DeKuiper, formerly of Russian Circles) will hit the road for some shows in support of the Sanford Parker-produced new album. Electric Hawk and Sweet Cobra are playing on all dates. That will take them through NYC for a show at Saint Vitus on March 7. Tickets will be available soon via Ticketfly.

Stream the new Bloodiest tracks and check out tour dates below...