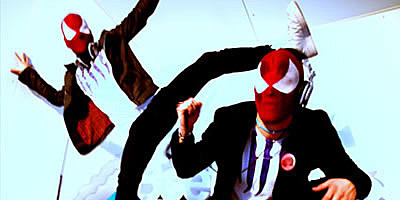 As a former music reviewer for my college radio station, I have come to hate the way most people describe music. Flowing, sonic, epic, bangers, ect. Most people (myself included) are bad at it and it should be left to the few who are capable of translating art into words. That being said, the only word I can think of to describe The Bloody Beetroots is jacked. I always feel like raising my arms mid chest, and then just moving them up and down in a jerky motion as fast as I can when I hear them.

The masked Italian duo never seem to stop producing, and they are on every dj's playlist. They are DJing tonight (March 6) at Hiro Ballroom with Pase Rock and Heartsrevolution, and will be playing at the sold out MSTRKRFT show tomorrow at Studio B. I included their over the top Goose remix here and a link to my latest mix which features their remix of a Timbaland song. Go drink 10 cups of coffee and turn it up loud. More dates below...