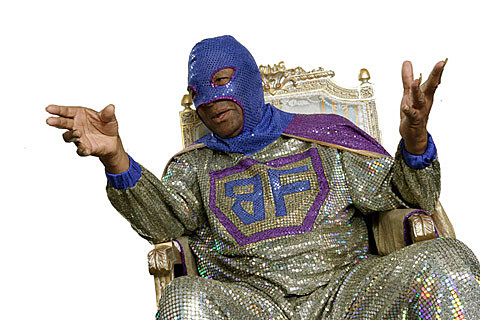 Ah, the weird, weird world of Blowfly. Clarence Reid has had varied career, writing and producing for Sam & Dave, KC & the Sunshine Band, and Betty Wright. He's also released singles under his own name since 1963. But he's probably best known to the planet as Blowlfy, "the first dirty rapper" and a bizarro superhero that loves sex. Starting in 1971 with Weird World of Blowfly, the man has been on a quest to nastify any and all songs that cross his path. He's done disco (Blowfly's Disco Party), hip hop ("Rapp Dirty"), and punk (Blowfly's Punk Rock Party). He's been featured in a documentary. He parties. Hard. And hilariously, as long as your sense of humor is sufficiently skewed and lowest common denominator parodies are in your wheelhouse. In the man's own laugh, "He he he heheheheah ah ah ah ah ah ah ah."

So it's 2014, and Blowfly, as his last album made clear, is Black in the Sack. He's playing a load of upcoming parties around North America, including a free show in Philadelphia on August 9 and two dates in Canada with 2 Live Crew. He hits Brooklyn's the Grand Victory on August 8 along with Runny and Citizen Blast Kane. Tickets are available now. The full list of shows are below.

All of the dates along with Blowfly's "Rapp Dirty" appear below.