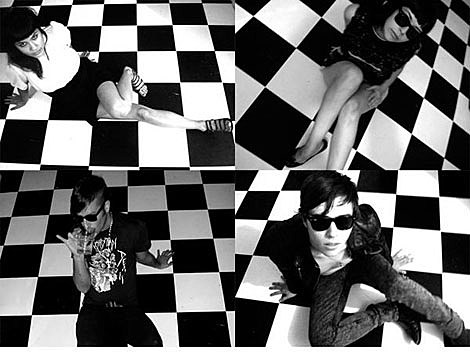 One could easily imagine L.A.'s Blue Jungle on the same bill as Thee Oh Sees, with their reverbed-out sound but instead they're playing Cameo Gallery tonight (10/8). Blue Jungle seem more inspired by mid-80s goth indie (Siouxsie, The Fall [yes they were], Lick the Tins) than girl groups or the normal C-86 influences, which definitely sets them apart. Their debut album, Baby Don't Cry, is hard to find -- physically at least, it's on Emusic and iTunes -- but is well worth seeking out. My favorite song from it, "Here We Go Again," is downloadable at the top of this page, and you can get more freebies from their website. Tonight's Cameo show, which is a Crashin' In party, also has Holy Hail, Mama Bear and We Are Country Mice.

Blue Jungle are also playing Shea Stadium (it was supposed to be Silent Barn, but has moved) tomorrow (10/9) with Montreal's Valleys who are at Bruar Falls tonight. More on that show in another post.

One last tidbit for tonight (10/8). At Silent Barn tonight are a newish band called I'm Turning Into who make super catchy '90s influenced indie rock (I'm talking Pavement and Superchunk). Two of them also now serve time in My Teenage Stride. If you can't make tonight's show, they've got a few more gigs coming up which are listed below.