The Beach Boys' beloved creative genius brought a 12-piece band of multi-instrumentalists/vocalists--and a local female string section--and all lived up to his contention that it's one of his best bands ever.

The Gershwin album, which was conceived under the aegis of his hero George Gershwin's estate, led off the second set--the first being a breathtaking recreation of Beach Boys classics ranging from the ultra-romantic 1963 ballad "Surfer Girl," his first composition, to the symphonic "Heroes And Villains" of 1967. While Wilson's ability to sing his signature falsetto vocal leads and harmonies is long gone, guitarist Jeff Foskett was downright spooky in mimicking it on hits like "Don't Worry Baby" and "Wouldn't It Be Nice." [Examiner]

As mentioned in that review, Brian Wilson's three shows at Highline Ballroom this week are part of the ongoing and inaugural Blue Note Jazz Festival, a month-long celebration of Blue Note's 30th Anniversary. The fest includes a ton of shows including the recent Aloe Blacc, Idle Warship, and Larry Graham gigs. Brian finished his run Tuesday night, while, Dave Brubeck (who just turned 90) and George Wein & the Newport All-Stars each began their own three-night run at Blue Note Jazz Club. Advanced tickets to the Dave Brubeck shows are sold out, but you can line up to sit be at the bar on a first come, first served basis (if you're 21+). Tickets are still on sale for George Wein.

The festival also includes many other shows we've mentioned before including the Jimmy Scott shows at The Blue Note on June 23. Tickets are still on sale.

The recently mentioned Bjorkestra show at Highline Ballroom on June 14 is also part of the festival. As discussed, tickets are on sale and can be purchased with a 50% discount by using the access code "BIGBAND."

The Chaka Khan shows at BB King's on June 18 are also part of the festival. Tickets are still on sale.

The festival also includes the Roy Ayers and Pete Rock show at Highline Ballroom on June 22. Tickets are still on sale. 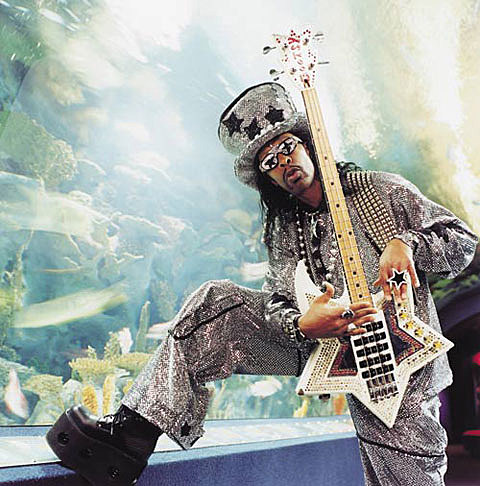 "Bootsy Collins was just one more band on our to-do list -- we didn't expect him to nearly steal the whole festival. After an annoying hour-plus wait that had the crowd chanting "bullshit," Collins instantly won the fans back in his favor by bringing THA FUNK. Everything was on the one after that. Lead guitarist Blackbyrd McKnight melted minds, while original P-Funk keyboardist Bernie Worrell provided the ballast. A special mid-set run found the band tackling classics by P-Funk, Jimi Hendrix, and Sly and The Family Stone." [American Songwriter]

Tickets are still available for the NYC show.

Tickets are also still on sale for the two Roberta Flack shows at BB King's on June 24.

Questlove is presenting Mo' Meta Blues I at The Blue Note on June 20 and 21. Both days consist of an early show and a late show. Mo' Meta Blues I features Questlove on drums/electronics, Booker T on organ/keyboards/vocals, Eric Krasno on guitar, and Christian McBridge on bass. Tickets are on sale.

The following night (6/23), The Roots will present Mo' Meta Blues II - Paid In Full 25th Anniversary featuring Black Thought and Rakim at The Blue Note. There will also be an early and a late show. Advance tickets for table reservations are sold out, but you can still get in at the bar on a first come, first served basis (if you're 21+).

"The Music of Stax Records" featuring Steve Cropper, Duck Dunn, Eddie Floyd and Lester Snell is happening on June 26 at Highline Ballroom. Tickets are on sale.

Last but not least, we want to highlight the Dances of Vice presentred Powerhouse Stomp II: a musical tribute to the classic cartoons of the 1920s, '30s, and '40s on June 29 at Highline Ballroom featuring Brian Carpenter's Ghost Train Orchestra. Sounds fun and tickets are on sale.

Check the Blue Note Jazz Festival's website for the full schedule. A selection of related videos below..