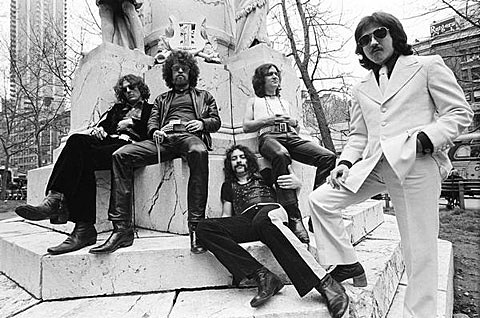 Ten years? That's impressive. Twenty? Dedication. But forty? That's commendable. Legendary hard rockers Blue Oyster Cult are touring and were set to celebrate their 40th anniversary at a NYC show tonight (10/28) at Best Buy Theater, but it has been postponed to November 5th due to hurricane. Expect "special guests and other surprises." Tickets are still available.

They were also scheduled to appear at iHeartRadio Theatre on 10/30, but that small capacity radio contest/streaming show is cancelled, though the invite says a new date will be scheduled too.

The appearances are also in celebration of the band's new boxset, Blue Öyster Cult - The Columbia Albums Collection, which gathers the band's fourteen Columbia releases with newly remastering jobs and bonus material. All tour dates and some classic video below...

Burnin' For You - Blue Oyster Cult