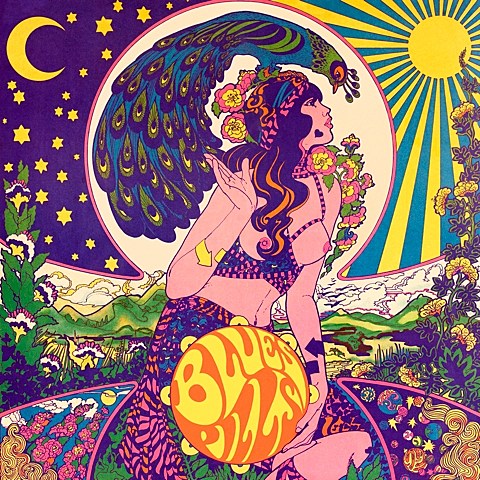 Blues Pills formed when Swedish howler Elin Larsson met former Radio Moscow members Zack Anderson (bass) and Cory Berry (drums), and connected over a love of early psych and proto-metal. They soon added French guitarist Dorian Sorriaux into the fold, and put out a few EPs and singles before signing to Nuclear Blast and releasing their self-titled debut album in 2014. (Cory left soon after and ex-Truckfighters drummer André Kvarnström took his place.)

The band have a ton of tour dates coming up, going from this month all the way through mid-August. Most of them are in Europe, but they are coming to the US in April to play Kirk Hammett's Fear FestEvil in California and a NYC show after that.

The NYC show happens April 16 at Saint Vitus with support from two likeminded local-ish bands, Philly's Ruby the Hatchet and NY's Dead Heavens, the band that gives hardcore legend Walter Schreifels (Gorilla Biscuits, Quicksand, etc) a chance to indulge his love of the late '60s. Tickets for that show are on sale now. All Blues Pills dates are listed, with a stream of their album, below.

UPDATE: Actually Blues Pills had to cancel their US dates due to visa issues. They write:

hello friends from overseas... we unfortunately have no good news this time...
due to unforseen difficulties with the US visa process, we will unfortunately not make it in april to USA, means we will not be able to attend at this years FEARFEST EVIL in CA san jose on 11th of april, as well as the show @ the st. vitus in brooklyn NY scheduled for 16th of april...
we want to thank both promoters for inviting us as well as the fans who was looking forward to our shows.
we are very sorry but are sure that time will come sooner than later, when BLUES PILLS get the chance to come over to north america.
all best from BLUES PILLS!

Dead Heavens is one of two new-ish bands Walter Schreifels is pursuing, the other being the more post-hardcore-oriented Vanishing Life with members of Trail of Dead. That band is coming to SXSW this week, where they'll play the free BrooklynVegan Friday party at Red 7 with Power Trip, United Nations, KEN mode, Single Mothers, and many more.

Ruby the Hatchet will be at SXSW too; they're one of the many metal bands we highlighted in our 2015 SXSW Metal Roundup.