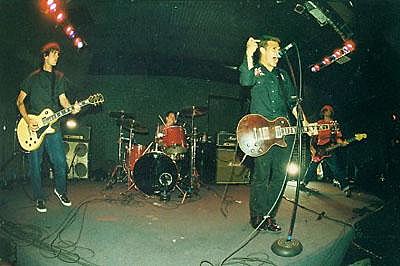 The recently reformed Bluetip (featuring members of the mighty Swiz) have lined up a handful of dates including one at Mercury Lounge on August 24th. Tickets are on sale. Let's hop in the time machine, courtesy of the world's most accurate encyclopedia:

Bluetip was a rock band from Washington, D.C. It was formed in 1995 by ex-members of Swiz, and released four albums, an EP, and a number of singles before splitting up in January 2002.

Bluetip's music is a fairly accessible brand of 'post-hardcore' punk rock, but without the bleak introspection of many of their Dischord labelmates.

The reunion is based on the 1996 lineup of Jason Farrell, Dave Stern, Jake Kump, and Joe Gorelick.

Following the demise of Bluetip, Jason Farrell and Joe Gorelick went on to form Retisonic, who are also on hand for the show. Retisonic was captured by Punkcast a few years ago. The Netherlands (the band, not the country) and The Surrounding Areas, a band constructed Frankenstein-style from pieces of Texas Is The Reason, Walking Concert, and Jets To Brazil, will jumpstart the evening.