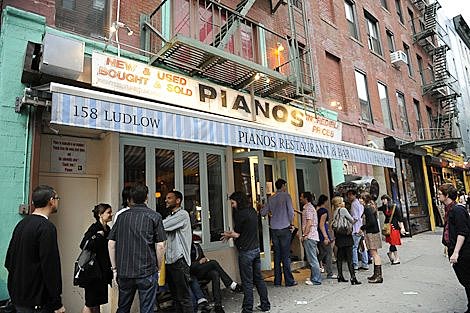 "A bar or club isn't technically allowed to play a copy written song without first securing the appropriate licenses from the performance rights group--such as ASCAP or BMI--that represent songwriters. Enforcement has traditionally been pretty lax over the years, although every once in a while, the organizations file a lawsuit to remind venue owners that they exist. In 2007, for example, ASCAP filed suits against a handful of spots, including Jay-Z's 40/40 and Hiro at the Maritime Hotel. More recently, ASCAP and BMI slapped Cafe Wha? with a suit back in March.

This time around BMI is turning its attention to the Lower East Side and coming down on Pianos, claiming the venue caused "great and incalculable damage" for illegally playing such favorites as "Say It Ain't So" by Rivers Cuomo; the Rolling Stones' "Paint It Black"; and your fave hit from 1986, "Final Countdown"." [Cityfile]

Kuroma, Acrylics, and Suckers all have shows coming up at Pianos. So do The Grates. Japandroids play there on July 11th.