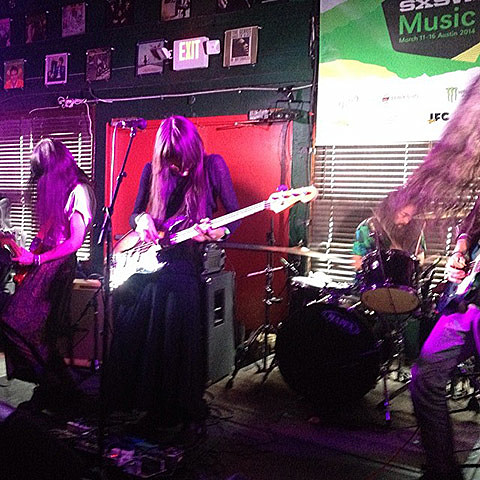 By the second song, "Haken," the band was furiously bouncing around the stage in unison to its roller-coastery waves of reverberating guitar noise and pulsating rhythms. Singer/bassist Taigen Kawabe led the charge with a manic, sometimes cackle-like vocal style and dramatic, wild-eyed gestures that included a tear through the middle of the crowd near the end of the set. - [Minnesota Star Tribune]

One of the most talked-about bands at SXSW this year was Japanese band Bo Ningen, due in no small part to their wild, guitar-swinging, in-your-face shows. The band will release their new album, III, via Stolen Recordings on May 20. (The record does not have last year's collaboration with Savages' Jhenny Beth but she is on another song, "CC.") You can stream "DaDaDa" from it below.

For those who weren't in Austin (or those, like me, who managed to miss them there), Bo Ningen will be back over for Coachella and then touring after. Those dates include two in NYC: April 25 at Knitting Factory and a free afternoon in-store at Rough Trade on April 27. No word on tickets for the Knit show just yet.