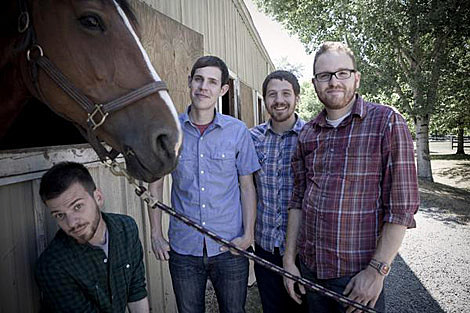 Seattle's BOAT are heading back to the East Coast for a short tour in support of their great new album, Setting the Paces, which came out Tuesday on Magic Marker Records. (Available on tangerine-colored vinyl!) The band play Union Hall on November 13 and Bruar Falls on November 14.

Sporting slightly fancier production than the band's first two albums, Setting the Paces shows off what BOAT does best: unpretentious, clever, stick-in-your-head indie rock. If you wish there were more bands that reminded you of the good ole '90s (Pavement, Built to Spill, Lotion), BOAT are for you. You can check out three tracks from Paces at the top of this post, plus a couple of their older tracks as well.

Finest Kiss just did a track-by-track interview with the band's D. Crane and J. Long. Read the segment where they talking about "Lately" (available for download above), along with some videos from their record release show in Seattle last week, the album cover art and all tour dates, below.... 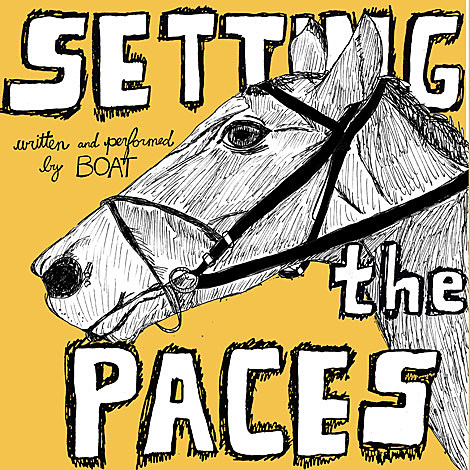 J: My favorite Boat song, and a favorite to play at shows for the past year, but it was the last one that got finished for the recording because we had tried it early on in the process and then we ended up re-recording it with all of us, me Mark and Dave playing it together at the studio. Actually, what was really fun during the last piece of recording Dave was doing, he still had to do the middle Lately vocal things and I had I had you do it like a million times. It was funny because my wife was over when we were doing it and she was like, "Wow he really goes for it when he does the vocal takes." It was really funny going back and listening to some of the vocal tracks solo. They were so hammy but so authentic too.

FINEST KISS: That's kinda like Boat in a nutshell: Hammy but authentic.

J: that was the one that I really, really liked and people liked at shows. We'd been playing it over a year and half. It was just finally getting to the point that it lived up to the greatness in my head or something, or the greatness of the shows maybe.

D: Yeah, because when it was demo it sounded like a UB40 song. I was singing it like lately, lately kinda weird chorus.

J: With some bad reverb.

D: Yeah, so it was questionable. Strange that it made it.

BOAT are also one of the more fun times you'll have at a live show these days. I counted both of their NYC shows here last summer amongst my favorites of last year. There are props -- confetti, plastic cup shakers given out to the audience, big signs they hold up -- but it never gets in the way of the songs.