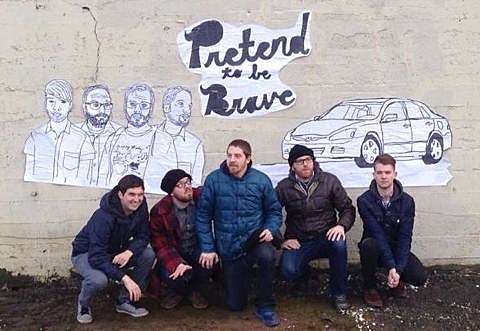 Seattle self-effacing indie rockers BOAT will release Pretend to Be Brave via Magic Marker on March 12. You can stream the self-described "epic car crash song" and first track to be released from the album, "Inside an Aquarium," below or download it above.

To help promote the album, BOAT asked some of their favorite bands to cover tracks from the new album which will be on a cassette titled Pretend to Be BOAT that comes with the first 100 pre-orders of the album. Tracklist and performers are below. For those of us who don't have a cassette player anymore, the band are releasing one track a week on their Soundcloud page, and you can stream covers by John Roderick, The Hairs, Burn Permits and Throw Me the Statue below.

Only a couple upcoming shows for BOAT at this point and only in the Pacific Northwest, but all dates are listed below.

Pretend to Be Boat track list
"Sharpshooters"--Throw Me the Statue
"Inside an Aquarium"--The Hairs
"Hating the Criminal"--Burn Permits (Police Teeth)
"Sore Toes and Elbows"--Z. Duffy
"Pretend To Be Brave"--Aqueduct
"With The Sea at My Back"--Math and Physics Club
"Interstellar Helen Keller"--The Quiet Ones
"The Big, The Bright"--Gold Bears
"This Isn't How I Pictured It"--Creeping Weeds
"Problem Solvers"--The Sea Navy
"Wave the White Flag"--Fishboy
"Grind Like Gears"--John Roderick