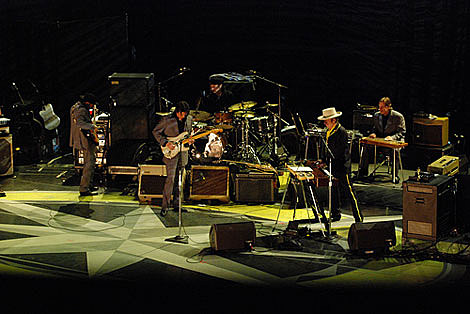 Huffington Post: A lot of the acts from your generation seem to be trading on nostalgia. They play the same songs the same way for the last 30 years. Why haven't you ever done that?

Bob Dylan: I couldn't if I tried. Those guys you are talking about all had conspicuous hits. They started out anti-establishment and now they are in charge of the world. Celebratory songs. Music for the grand dinner party. Mainstream stuff that played into the culture on a pervasive level. My stuff is different from those guys. It's more desperate. Daltrey, Townshend, McCartney, the Beach Boys, Elton, Billy Joel. They made perfect records, so they have to play them perfectly ... exactly the way people remember them. My records were never perfect. So there is no point in trying to duplicate them. Anyway, I'm no mainstream artist.

Bob Dylan and his band played for the second night in a row at United Palace Theater on Wednesday (11/18). Those that went both nights were rewarded with a different setlist at each show (until the end anyway). Night one setlist HERE. Night three tickets HERE. Night two's setlist below...