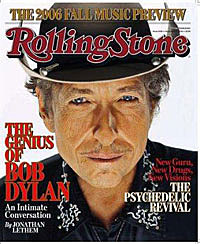 "I don't know anybody who's made a record that sounds decent in the past twenty years, really," the 65-year-old rocker said in an interview with Rolling Stone magazine.

Dylan, who released eight studio albums in that time, returns with his first recording in five years, "Modern Times," next Tuesday.

Noting the music industry's complaints that illegal downloading means people are getting their music for free, he said, "Well, why not? It ain't worth nothing anyway." [REUTERS]

Does he mean it, or this just a carefully calculated controversy timed with the release of the self-regarding old money-machine's new album?

Hasn't he heard the new Kevin Federline yet?