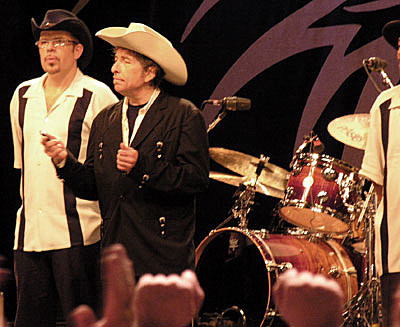 (as I was saying) Friday (June 24th, 2005) I saw Bob Dylan and Willie Nelson @ Yogi Berra stadium in Montclair, NJ. Here are the photos of Bob (who can still rock it). The rest of the text in this post was written by guest show reviewer Lupe Constantine. 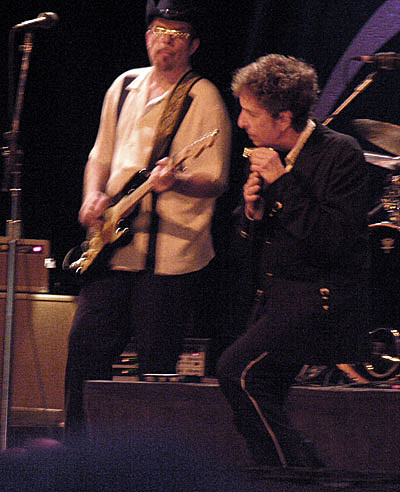 Seeing Willie Nelson was a bit like opening a carton of milk dated 1975 and finding its contents unevenly spoiled. This is peculiar when comparing him to his contemporaries who have redefined themselves, tried out new sounds, or changed in some fundamental way... CONTINUED BELOW 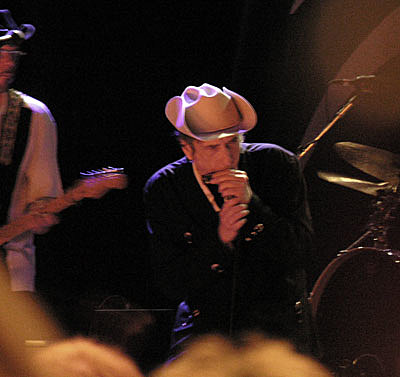 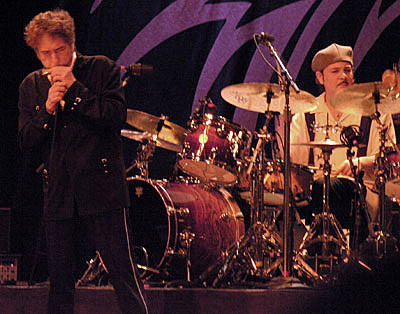 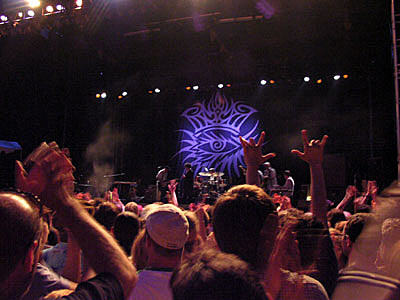 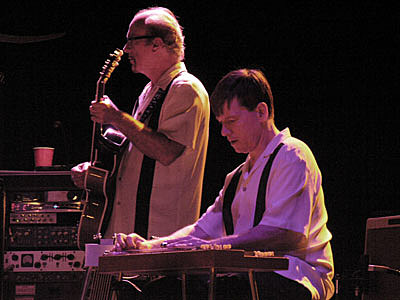 His voice still sounds almost exactly the same, perhaps because he never wrote a song or covered one in a key unnatural to him. Close your eyes, blotting out the grey where there once was red or the sort of Matryoshka-like way his body juts out, and you’re back in the seventies. Almost, but not quite—there is that spoiled quality, it’s just so surprising that most of him is ok. His show is rehearsed and, at times, tiresome, dominated by songs he’s played countless times in exactly the same way. At some point I was quite sure I was at some community festival and someone on stage was doing his best Willie Nelson impression. When he played his new song, a standard blues with some lyrics about not being Superman I was embarrassed for him, especially because this was the song he played most enthusiastically. Where’s Daniel Lanois when you need him? One has to wonder if, when he is naked, his pony tail ever gets stuck in his butt-crack. His band, especially his piano playing sister (playing a real piano), at times, sounded amazing. They perfectly suited his relaxed country-blues style. However, the occasional collapsing musical transition made me wonder if Willie sacrificed quality to nepotism. Everyone seemed to be related. I imagined the stadium imploding from a pretentious bomb when the young guitarist with a crooked beret on his head sang some standard blues number, a slow one, peppered with uninspired and sometimes flat-out bad solo fillers between sung phrases. Also the drummer seemed to be hitting his sticks against a coffee can and a stack of newspapers. But, man, when he played “On the Road Again” and I closed my eyes, I could almost imagine what my great grandparents saw in the kooky hippie. 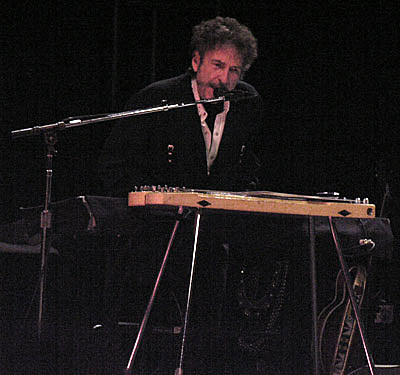 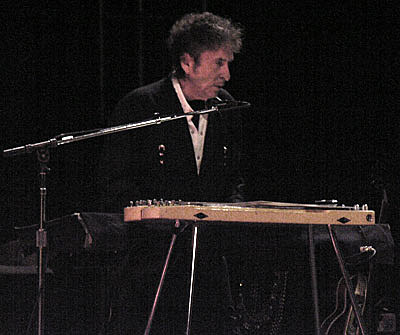 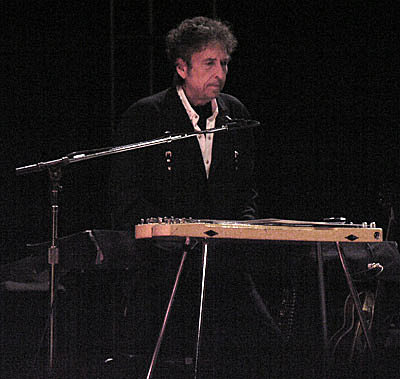 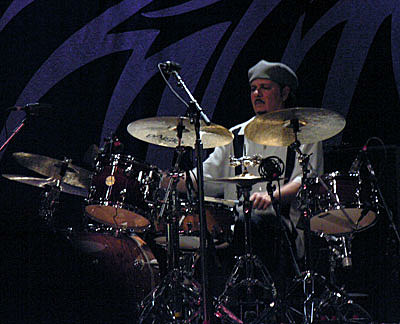 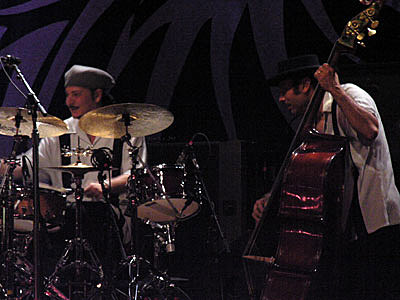 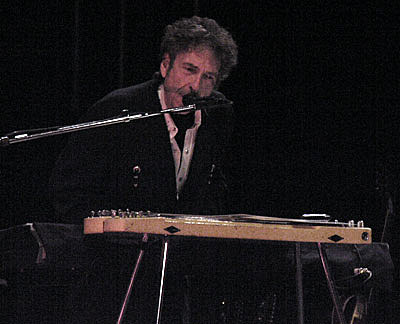 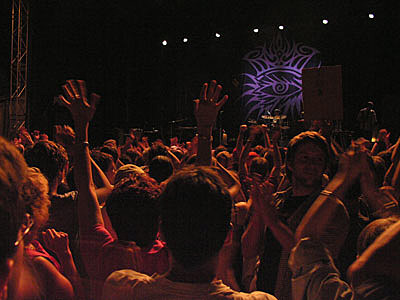 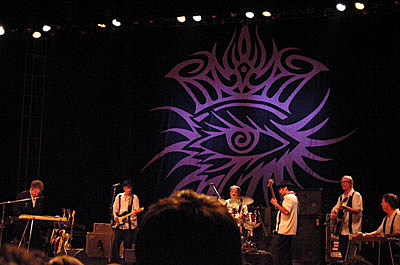 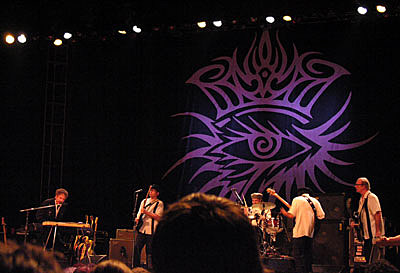 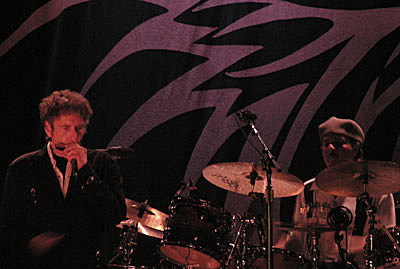 After Willie finished his set and wobbled off the stage, the stadium lights turned on for twenty minutes making the bundled crowd sweaty and ripe. I scanned the crowd, noting the dramatic variations in the audience: age, background, reason for living… The one thing everyone had in common, besides finding a parking spot, was that they were white. 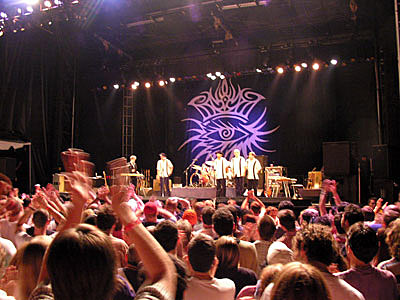 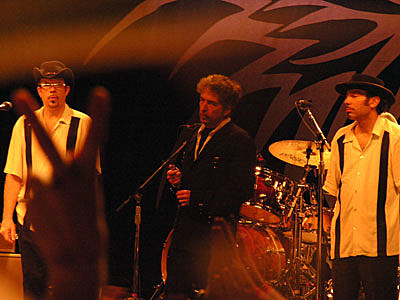 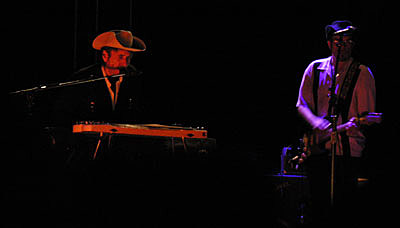 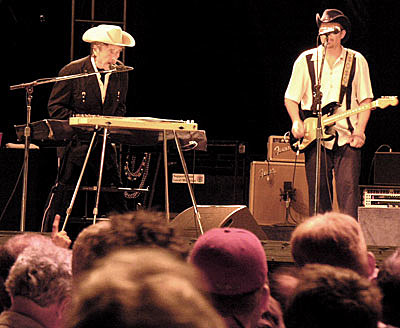 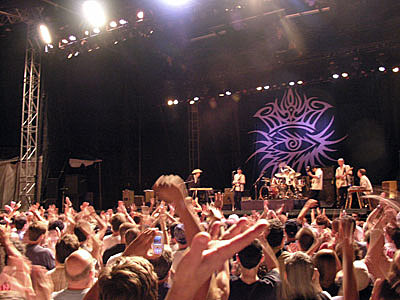 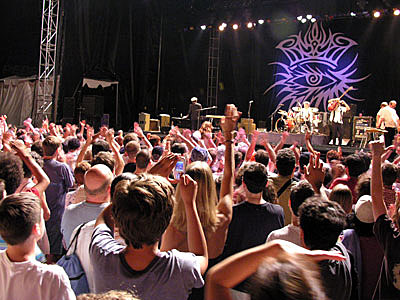 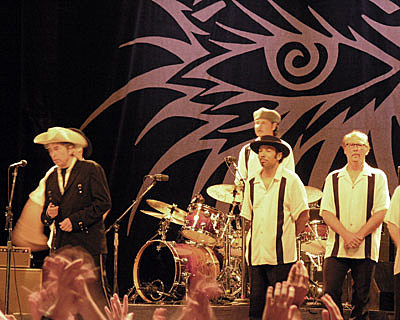 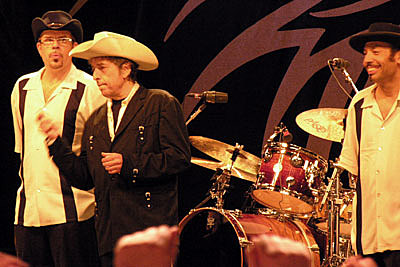 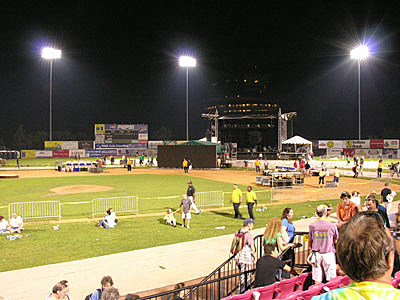 Then the lights were turned off and Bob Dylan and band took the stage. Dylan has reinvented himself. It comes out of necessity, a sense of showmanship and even artistry. His voice, which went South sometime in the early nineties, sounds cankered, you can hear the death-rattle in every line he sings. He now plays the keyboard throughout the entire set and he plays it exactly the same way he used to play the guitar, with rhythmic, simple triads and odd repetitive melodies. He waves his body back and forth as he plays. Dylan decimated Willie. Not only his band, but the entire sound system seemed engineered for this particular feat. I wondered if maybe Willie would come out and play a song with Dylan and I was actually scared by this thought—I could perfectly imagine Willie coming out and beginning a song and then being twirled into the sky like Dorothy being swept away by the tornado. Power, dynamics, sophistication, nuance; these are all words I would use to describe the way Dylan has architected his new sound. And make no mistake, it is Dylan in control here, he pokes and prods his musicians constantly throughout the show, sometimes verbally other times with the commanding nod of a super executive. The songs are barely recognizable anymore; he has stylized them to make up for his aging disabilities. Everyone knows the words and so he chooses to enunciate them with the drummers marching rhythms, the guitarists note-perfect renditions of the melodies, his own melodic harmonica playing, or the crowd’s singing of the songs true melodies, like unpaid back-up singers. His set is never the same from night to night. This is an example of how to get old. When he pompoused himself in the center of the stage, nary a bow, hardly a word, and stuck his hands out like a Vegas whale about to throw dice, I smiled, glad to have seen this incredible showman once more.

Previously
The pictures of Willie