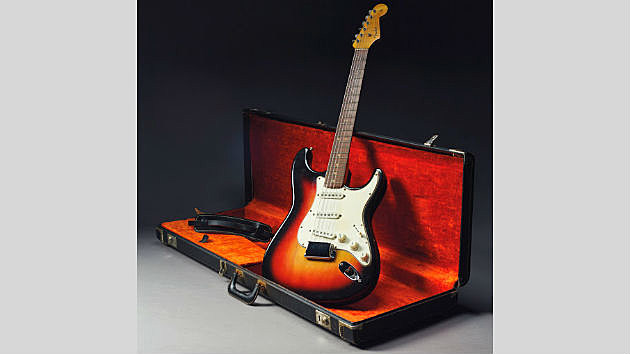 Bob Dylan's sunburst Fender Stratocaster that he played at the Newport Folk Festival in 1965 just sold at auction for a cool $965,000, the peak of a string of high profile music-related auctions held last week. The guitar was the axe Dylan used the first time he went electric in a live setting, an occasion that may or may not have elicited boos from the crowd in attendance (a 24-year old Dylan said they "certainly booed"). It was also the first time Dylan performed with a backing band. The auction marked the highest price ever paid for a guitar, electric or otherwise. Sorry, Eric Clapton, Blackie only sold for $959,500.

Bruce Springsteen didn't fare too badly at auction either. His handwritten lyrics for "Born to Run", which apparently are quite different from the lyrics to the finished song, sold for $197,000 just the day before the Dylan Stratocaster sale. Also for sale that day were some Mick Jagger love letters and a letter from John Lennon. Last time Mick's love scribbles went up for auction, they sold for over $300,000. Those letters were addressed to Marsha Hunt, Jagger's former muse/lover who is said to be the inspiration for "Brown Sugar".

As the New York Daily News put it, "Tramps like us, baby we were born to bid." SMDH.