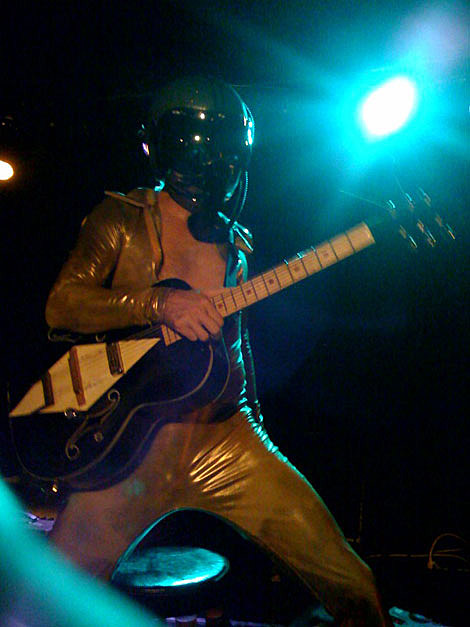 I only caught a small fragment of Maker's more subued, slide-guitar set. His newest release, New Moon Hand, out now on Big Legal Mess, recently got a favorable write-up in the NY Times, part of which is excerpted below.

At the Mercury Lounge, Bob Log III took the stage in a motocycle helmet and a full-body suit and played for over an hour. The jokes cracked throughout were crass and entertaining, but the music was riveting too. Log kept time with a kick drum, cymbal and sampler while burning through lightning fast slide riffs and soliciting the crowd for beers. Live, the distortion came way down to reveal the chops behind the helmet. No one made a "Boob Scotch" (that I could tell), but Log did succeed in provoking some crowd participation during "I Want Your Shit on My Leg."

Similar "I Want Your Shit On My Leg" antics from a show last summer (video), with that Willem Maker review from the times, below...

...Mr. Maker seems strangely familiar, and even more strangely good. He sounds older and wiser than he is (which is 32): sort of like Tom Waits without the hobo shtick. He sings in an imposing growl, biting off the ends of his rural rhymes, and his songs are rough and beautiful, somewhere between blues, country-rock and hymns. One song, "Lead and Mercury," contains as much poetry as the others, but its title isn't a metaphor: it's about heavy-metal poisoning he suffered as a teenager while growing up in Carrollton, Ga., in an area where copper slag had been illegally deposited in farmers' fields, a condition that led to 10 years of manic depression. That's why you haven't heard about him until recently; that's why he's appearing fully formed. [NY Times]