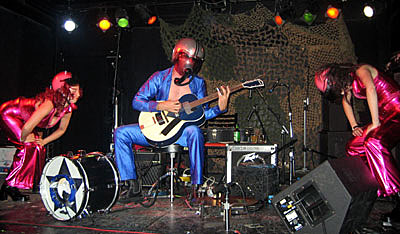 Bob Log III is going on tour with Scott H. Biram this summer. Tickets are on sale for a show at Mercury Lounge and for one at Southpaw.

One of Bob Log III's more controversial antics is 'Boob Scotch', that is, scotch which has been stirred by a female (or male) breast. This practice was integrated into the aptly titled song "Boob Scotch" from the album Log Bomb, in which Bob Log sings "I think we need to sit down and talk, put your boob in my scotch. Come on get your tit in my drink, stir my scotch with something that's pink." Bob Log III often invites audience members to 'make' a Boob Scotch, asking them onstage to dip their breast in his scotch (usually pre-ordered from the venue's bar) after which he lifts his helmet slightly and downs the drink. Log has been known to dip his own breast in his scotch, especially in Japan, a modest nation and usually not willing to expose their 'Boob'. [Wikipedia]