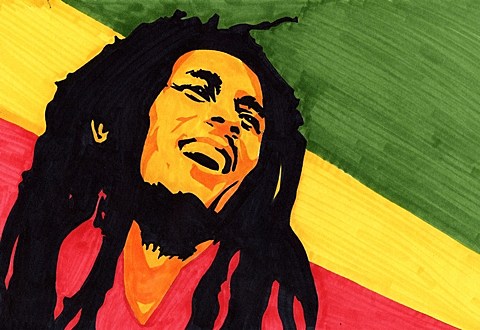 In late October 1979, Bob Marley and the Wailers made their Apollo debut with a sold-out seven show run. These performances were very special to the band for several reasons. Harlem was where Marcus Garvey first reached out to the African American community hearkening them to "look to East Africa, for the crowning of the Black King" - an idea which helped kindled the early flames of the Rastafari Movement. Additionally, Marley's concert run at the Apollo was his attempt to connect with the black community in North America and spread the message of Pan-Africanism and global black unity.

As quoted above, reggae legend Bob Marley made his Apollo Theatre debut back in 1979 and now that concert will be commemorated with a tribute happening November 29 at the same venue. There's two shows (8 PM and 11 PM) happening that night and they will feature his backing band The Wailers, fellow reggae vets Third World and Maxi Priest, and Bob's son Ky-Mani Marley. Tickets for the show are on sale now.

Meanwhile, a new live Bob Marley album/film, Uprising Live!, comes out next week (11/25). Watch him playing "I Shot the Sherrif" from the film (via Esquire) below...