Bob Mould at one of the last Copper Blue shows, FFF 2012 (more by Glen Brown) 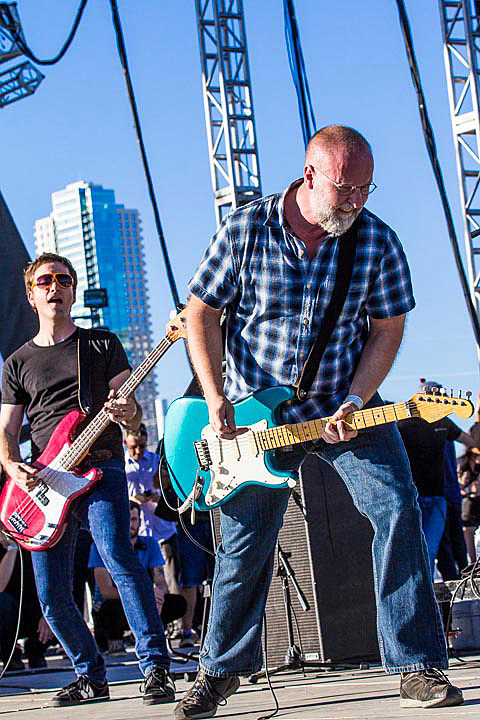 After trotting out jams from his Sugar catalog earlier this year, Bob Mould has put the records, in their entirety, to rest

And now it's time to say farewell to Copper Blue. I'm not retiring the songs -- many of them will be in my live sets forever -- but I am putting the "start to finish" reading of Copper Blue to rest after playing it at the El Rey Theater in Los Angeles, CA on October 30 and then at Fun Fun Fun Fest in Austin TX on November 2.

It was wonderful to pay tribute to Copper Blue by opening the 2012 shows with a start to finish reading of the album. By the end of the North American tour it felt a bit predictable. The longtime followers know my restlessness all too well, so my need to shake things up should be no surprise.

Sugar's catalog was recently reiussed by Merge in the US, and will see a UK/EU release via Demon Music Group on December 10th.

It's not that Bob Mould is one of those types of guys who would always rather showcase new material, in fact, he's always been one to celebrate his back catalog. Case and point, his See a Little Light documentary which is currently seeking funding via Kickstarter.

Mould is currently around 20% toward his $95k goal, which ends in 37 days. Contribute if you can. Video on the project is below, beside a string of tour dates.

Bob Mould's next date with NYCers goes down on 2/8/13 at Highline Ballroom, where he'll be DJing alongside his Blowoff partner Richard Morel (tickets). Their last Blowoff party at the venue was on 11/9.

While we're on the subject of Kickstarter, Of Montreal is also looking to do a concert film of their own titled Song Dynasties. The band is currently around 1/3 of the way toward their $75,000 goal in 26 days. Contribute here, but first check out their video presentation below. below.

Of Montreal is on tour this fall, and will play NYC at Webster Hall on December 11th as part of a larger tour. All dates are listed again below...