Leo Allen & Bobby Tisdale (will be together again Thursday night) * 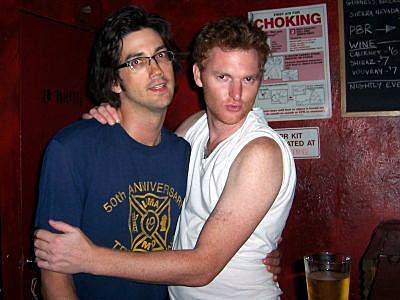 Comedian Greg Johnson was all set to host our inaugural Rock 'n' ROFL party at Pianos tomorrow night (Feb 28, 2008) until he suddenly went ahead and 'pulled a Paul' (aka he has removed himself from the lineup), BUT DO NOT FEAR...... we are not only NOT cancelling the show, we have already confirmed a more than qualified replacement, and that is none other than Invite Them Up's own Bobby Tisdale.

Tonight (Feb 27) you can catch Bobby at Riffi co-hosting the very last Invite Them Up show EVER. Tomorrow catch him hosting Rock 'n' ROFL at Pianos. He'll take the stage around 8:30 - right after Peasantt finishes soothing our souls with his sweet sounds. Tickets include a free bottle of Newcastle.

Check out the interview with Peasant that Gothamist posted today. Check our recap of the Monday night Invite Them Up show.

P.S. Todd Barry will be on Conan O'Brien tonight (Feb 27)