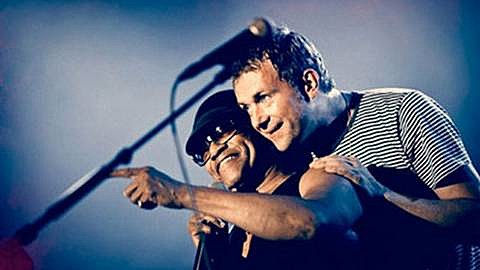 Bobby Womack, whose first new album in 18 years came out earlier this year, is performing a free show at the Apple's recently expanded and reopened SoHo Store on Tuesday (9/18). Making this a very special event are the album's producers -- Damon Albarn and XL Records exec Richard Russell -- who will be performing with Womack, along with Kwes, TV on the Radio's Jaleel Bunton, and Remi Kabaka. The short performance starts at 7 PM and will also feature a Q&A. It will be the first performance Womack will have played with this band. This announcement comes after Womack cancelled NYC shows a couple times over the summer due to illness.

If you can't make it to the Apple Store, Womack, Albarn and the rest of them will also be performing on Late Night with Jimmy Fallon on Friday (9/21). You can check out reheasal footage of Womack with this all-star band from earlier in the week below.