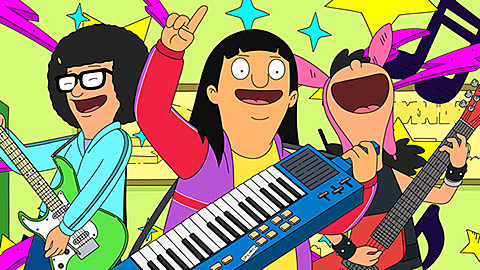 Like Wes Anderson films, music is pretty intrinsic to FOX animated comedy Bob's Burgers. There seems to be a an original song in just about every episode. Some of those songs then get covered by bands like The National. For those who have been hoping these songs might become available separate from the episodes, it looks like you're in luck. The AV Club reports that during a press conference, show producer Loren Bouchard told folks that a soundtrack is in the works and should be out by the fall.

In other news, Bob's Burgers is finally back this Sunday (3/9) with new episodes after a winter break. It's back at a new time too -- 7 PM EST -- for the rest of the season. Why? In true Bob's Burgers style, they let you know in song, which you can watch below (via Vulture). It may have something to do with the update of COSMOS hosted by Neil deGrasse Tyson which premieres Sunday at 8 PM... but still watch the video (and some other BBs songs) below...