Body/Head at MoMA in 2013 (more by Amanda Hatfield) 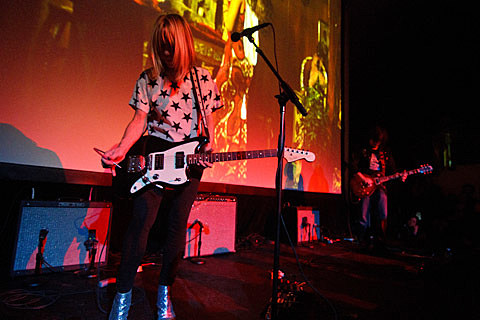 Kim Gordon's duo with Bill Nace, Body/Head are on board for Boston's Hassle Fest IV this November (with Jason Lescalleet, No Joy, Quilt, Downtown Boys and more), and directly before that they'll play two nights at Brooklyn's Union Pool on November 6 & 7. Both shows are with Wolf Eyes' Nate Young and his band Regression Nightmare. Night 1 will also be opened by Bill Nace's past collaborator Steven Baczkowski, and night 2 also by Vanessa Rossetto. Tickets for night 1 and night 2 go on sale (9/30) at 2 PM.

Kim also has an art show opening in NYC in 2015. All Body/Head dates are listed below.

In related news, Kim's ex-Sonic Youth bandmate Lee Ranaldo (who played Union Pool a few days ago and has an upcoming duo set with Noveller) has an art show of his own opening in NYC. The show's called Lost Highways and it opens on October 4 at One Mile Gallery (475 Abeel St) with the reception going from 6-8 PM. The show runs through October 25.