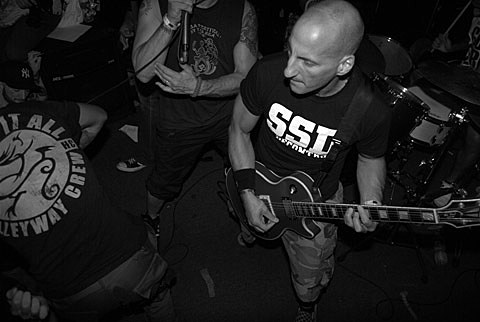 Black & Blue Bowl is almost here, and in addition to the previously discussed Rancid, Warzone Tribute, Sheer Terror, Youth of Today and-many-others-show at Webster Hall on Saturday (5/19) -- advance tickets sold-out, a few available at the door -- here are a few related shows set for Sunday (5/20) to help round out the weekend.

The first is a good old fashioned matinee and goes down at 3PM at Bowery Electric on 5/20. Bold (with original lineup in tow like they were at Lit Lounge) will join Skarhead and Provider along with a spoken word performance from John Joseph (of Cro-Mags, who play NYC soon with Sick of it All). Ten bucks or your Black & Blue Bowl ticket stub gets you in. Those 21+ and over with $20 can also stick around afterwards for a secret show.

Later that night in Greenpoint, Danny Diablo will team with Subzero, Ill-Roc Soldiers, Jaysaun, Lifestyle (with Skam Dust), DGAF, Iron Bar Collective and Matt Maddox for a second show on Sunday (5/20) at Red Star (at 30 Greenpoint Ave). $10 gets you into that 9PM show (not free to B&B ticketholders).

In hardcore-but-not-B&B Bowl-news, Urban Waste will hit Studio at Webster Hall on June 16th with support from Dead City Riot, Crushed, and Scrapers. Tickets are on sale.