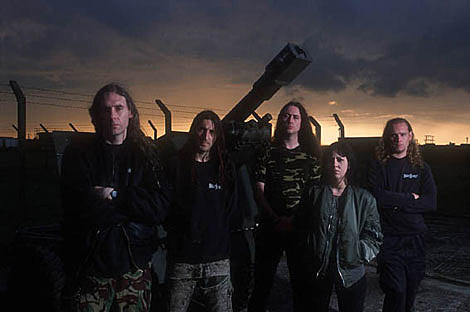 Maryland Deathfest added a bunch of big names to the 2009 lineup, but debatedly none are as massive as Bolt Thrower. It will be the band's first show in the US in 14 years! SMNews caught up with the band who offered a statement:

"Due to the fact that we are not real festival lovers or great fans of flying, the chances of us ever coming to the States for a one-off show was always very small.... we've finally given in. It's hard to believe that it's been 14 years since we last played in the US, so we are very happy to announce that we are finally coming back. BOLT THROWER will be playing Maryland Deathfest VII, on May 22-24, 2009, at Sonar, Baltimore, MD.

Also, in a few weeks time we will be announcing the only European festival show we will be playing next year. We'll keep you posted on both shows as soon as we have more info."

It was subtle, but you might have caught it.... "one-off show". Let's hope they don't mean it. Enslaved, Mayhem, Atheist, Pestilence, Marduk, Immolation, Brutal Truth, Hail oF Bullets, Pig Destroyer, Rotten Sound, and sooooo many others are also playing the deathfest. Full lineup below.

Enslaved recently dropped their new record Vertebrae, AND announced dates for a North American Tour in 2009 with Swallow The Sun and Keep Of Kalessin! The tour will last through the month of May. The NYC date is May 24th a the Blender Theater. Tickets for all shows are on presale at enterthevault.com until Nov 26th. After that check Ticketmaster. All dates below...