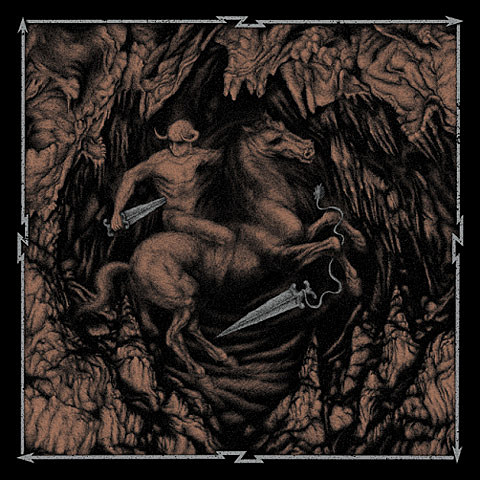 Bölzer might be bent on world domination, though they're doing it at their own pace. The Swiss/Kiwi blackened death duo are set to release their new EP Soma through Invictus Productions on August 5. The two-track offering caps a heck of a summer for the band who edged towards a true breakout after two fiery sets at this year's Maryland Deathfest. And now the internet is abuzz after Soma's full stream went up. You can check out Soma below.

Noisey's J. Bennett caught up with singer/guitarist KzR and asked him about a rumored full-length:

So you've completed the conceptual pairing with the two EPs. Where does that leave you for the full-length you're working on now?
We started writing new material over the last year or so. We write really slowly--well,I do. I like to give the material a lot of time to gestate and grow on its own terms, so it's important for me to start playing around with an idea and then put it on the backburner for however long until it rises of its own accord. The end result is usually a lot better that way. I don't like to force things. So we're working on a third song now. They're not all complete, but it's starting to take form. The intention is to make a not very long full-length. For me a perfect album length is like 40 minutes. We're not going to make an hour-long record. No way. It'll be around the six or seven song mark. And there will be an exciting cover in there as well.

It's interesting to read KzR mentioning his 'slowness,' as Bölzer's relative rarity was the subject of a piece by Invisible Oranges' Dan Lawrence earlier in the year. His take? While Bölzer have only cut eight songs, they're a pretty great eight. And there's no substitute for quality, even if it takes a long time to come.

The Soma stream appears below.