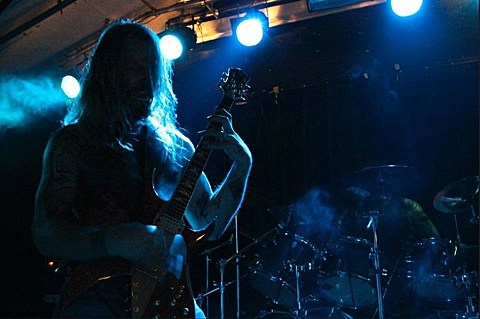 Swiss death metal duo Bölzer garnered a substantial buzz on the strength of their 2013 EP (and only proper release to date, aside from a demo) Aura. That EP earned Bölzer a clutch of year-end acknowledgements and a spot on this year's Maryland Deathfest. It's got three songs, but just about everyone agrees that it features an obvious standout: a burner called "Entranced by the Wolfshook." If you haven't heard it yet, check that one out below.

The heat is now on Bölzer for their follow-up release, Soma, another EP and their Invictus Productions debut. Though the release has evidently encountered delays and doesn't have a drop date yet, the band have released a single from it. "Steppes" doesn't deviate much from the style established on Aura -- it's basically Incantation-influenced death metal with an inviting analog production and a propensity for weirdly bright melodies that sound like they escaped from a Floor album. To these ears, "Steppes" doesn't have the same instant-classic zazz that "Wolfshook" does, but it's a ripper anyway. Lightning rarely strikes twice, and as far as regressions to the mean go, Bölzer could've done much worse for themselves.

Stream both "Steppes" and "Wolfshook" below and compare 'em for yourself...