"No smoking at the Buzzcocks show, apparently there's a bomb scare outside. Fuckbeans..." - Joey Outten 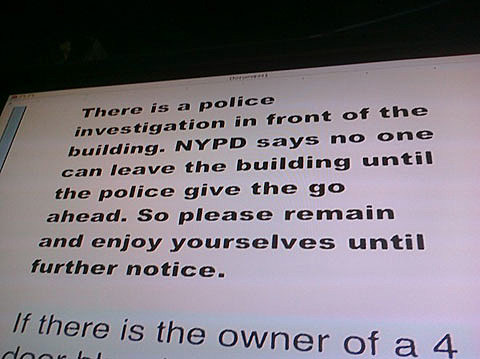 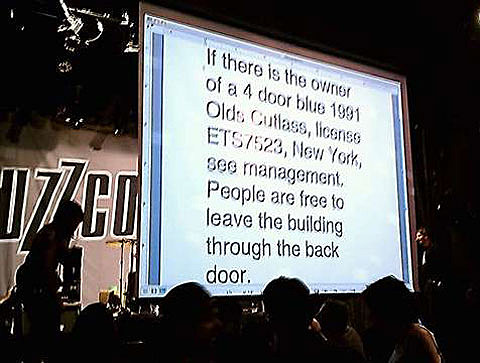 "New York City police evacuated several floors of a building and several streets were blocked off near Manhattan's Union Square after a Thursday night report of a suspicious vehicle with two gas cans found in the back seat.

The bomb squad suited up and began an investigation of the 1991 Oldsmobile Cutlass Ciera, which was found in front of the Con Edison utility building around 10 p.m.

Chief police spokesman Paul Browne said several floors of a high-rise residential building were evacuated and some streets in the area were blocked off as a precaution. It wasn't immediately clear if the vehicle was a threat.

Union Square, located on Manhattan's East Side, is a major pedestrian and tourist thoroughfare. New York University, Greenwich Village, and the landmark Flatiron building are nearby." [AP]

Also nearby: Irving Plaza where last night's Buzzcocks show was happening at the same time as the bomb scare. Mikey reports that "they stopped mid-song (E.S.P.) to say the police want the owner of a 91 blue cutlass to move his car. Then finished the song..." and that "The announcement was made around 1130 and they continued playing untli midnight." Rob confirms that "Brilliant Buzzcocks show goes on despite bomb scare right outside. Surreal coming out into the street jammed w/bomb squad, cops, fireman." And finally, Michaela reports:

Amazing show tonight, truly did both albums and long, long encore. (Irving Plaza's crappy sound system was just an insult!) And yes to Anon 2:25, no Howard Devoto, but Diggle did a rabid Harmony in My Head. Glorious, and they too seemed to have had a great time!

The albums they played were Another Music in a Different Kitchen and Love Bites, and if you missed it, they aren't going very far. The next two stops on their 22-date North American tour are Friday night in Philly and Saturday in Farmingdale, NY! Videos from Wednesday's Baltimore show below...