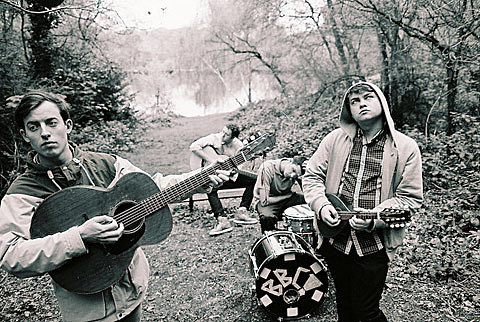 Brit band Bombay Bicycle Club are set to make their American debut this March in Their early show at Mercury Lounge on March 14 with Jonquil is already sold out, and have just added a late show that same night which just went on sale (no opener listed). They are also playing an all-ages show the day before (March 13) at Knitting Factory with Jonquil which still has tickets. They're then off to Austin for SXSW.

The quartet from London were originally known for being from the same scene -- and high school -- as Cajun Dance Party, another hotly tipped band of youngsters. (Cajun Dance Party broke up, two of which went on to form Yuck.... who are flying here as we speak after missing their Mercury Lounge gig last night.) Though they formed in 2006, pretty sure none of them are old enough to drink in America.

Musically, Bombay Bicycle Club have gone through some changes. Their first album (2009's I Had the Blues But I Shook Them Loose) was energetic and post punky, but last year's Flaws found the band dabbling in pretty, pastoral folk not unlike Noah & the Whale (who have two NYC shows coming up). The band are about to record their third album -- what sound will be next? A few Bombay Bicycle Club videos are after the jump.

Bombay Bicycle Club - Rinse Me Down