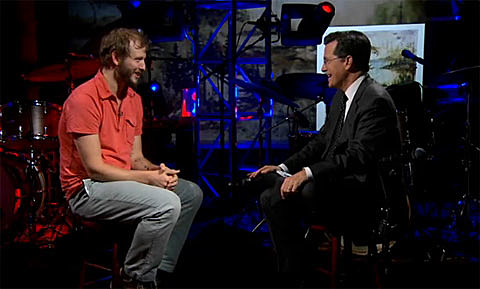 The Colbert Report kicked off its "summer concert series" last night (6/20) with Bon Iver. Colbert interviewed Justin Vernon about disease-influenced recording, majoring in religious studies and women's studies, and more. Justin and his 9-piece band then took the stage to perform the recent single "Calgary," off the self-titled (which by the way, is an idea that Stephen Colbert finds incredibly egotistical) album that drops today via Jagjaguwar/4AD. Justin also performed a web exclusive of "Skinny Love" with his band providing harmonies and stomps/claps. The band that played with Justin was in factMatt McCaughan, Sean Carey, Mike Noyce, Rob Moose, CJ Camerieri, Reggie Pace, Mike Lewis, and Colin Stetson aka all the dudes who will also be out on tour as Bon Iver soon. You can watch all of it below.

The "concert series," or StePhest Colbchella '011, continues tonight (6/21) with Florence and the Machine. Talib Kweli plays Wednesday (6/22), and the Black Belles play Thursday (6/23). As Colbert pointed out, Jack White will also be there all week. The label clears that up a bit:

Here at Third Man HQ we imagine that people probably think of us as a bunch of record nerds sitting around discussing our favorite Dutch freakbeat albums and mono Texas psych pressings...Well, that's only partially true. We like all kinds of non-musically related stuff... Comedy, current events, television, records..damn, did it again.

ANYWAY, long story short, we'll be combining some of our favorite things this week when Third Man will be featured on Comedy Central's Colbert Report. That's right, two titans of comedy collide when Stephen Colbert meets Jack White here at Third Man Records in a series of segments to air this week starting on Tuesday the 21st. And what's more, our own rarely spotted creatures The Black Belles will perform live on The Colbert Report this Thursday the 23rd. We're so proud of our little garage rock goths.

So tune in this week, starting on Tuesday at 11:30 pm ET for a week of music, TMR and the Black Belles on The Colbert Report. Amazing... Stay tuned for more updates on this late breaking development.