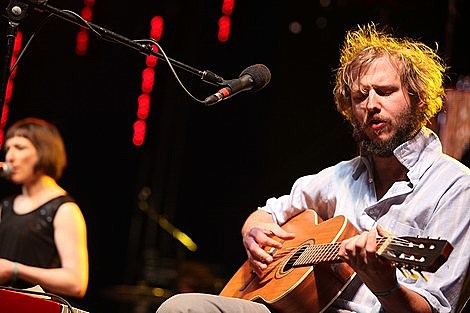 The venue is also hosting the New Sounds series, which includes performances by ETHEL and the Bang on a Can All-Stars. Details on those are below. Check out a video of the BoaC All-Stars rehearsing a Steve Reich piece from a few years back below too. You'll notice Bryce Dessner of the National is in the ensemble in that video. He's currently working on his own new piece with brother Aaron and Matthew Ritchie to debut at BAM this fall.

Also, as part of their trio of "Contemporary Contexts" concerts, Merkin Hall will be bringing Signal, who will premiere a new work from Nico Muhly and UK composer Harrison Birtwistle, in May.

The full schedule is below...

The New York Guitar Festival returns to Merkin Concert Hall in 2010 for its 10th anniversary season. This year's festival celebrates one of the most creative and influential personalities of the silent film era. Each night an artist or ensemble will give the world premiere of a New York Guitar Festival commissioned score for early silent classic films by Charlie Chaplin including The Immigrant, Modern Times, City Lights, The Gold Rush and The Kid. They'll be shown along with short films by Buster Keaton and others. The festival is curated by New York Guitar Festival founder and artistic director David Spelman and features artists David Bromberg, Marc Ribot, Bon Iver, Alex de Grassi, Gyan Riley, James Blackshaw and others.

Thu 01/21/10 at 8 pm
Bon Iver & Charlie Chaplin's The Gold Rush (1925, 82 minutes)
Steve Kimock & Buster Keaton's Cops (18 minutes)
Bon Iver is the nom-de-guerre of musician Justin Vernon. His album For Emma, Forever Ago was a critical and commercial hit, making him one of the most talked-about indie artists of 2008. For this performance he will be joined by Chris Rosenau of indie rock band Collection of Colonies of Bees, whom Justin calls his "guitar mentor." Steve Kimock is best known as co-founder and guitarist for the San Francisco jazz/rock/funk band Zero and is a veteran when it comes to performing American roots music. He's recorded and performed with many members of the Grateful Dead family (Jerry Garcia once hailed him as his favorite guitarist), Bruce Hornsby, Pete Sears and Hammond B3 master Melvin Seals. He currently records and tours with his band Crazy Engine.

Thu 01/28/10 at 8 pm
Alex de Grassi & Charlie Chaplin's Modern Times (1936, 87 minutes)
James Blackshaw & Fall of the House of Usher (Directed by James Sibley Watson and Melville Webber, 1928, 14 minutes)
Often cited as one of the top fingerstyle, steel-string acoustic guitarists, Grammy nominee Alex de Grassi is renowned for his impeccable technique, innovative artistry and compelling compositions. Over the years, de Grassi has explored a variety of world music influences and stretched his repertoire to include interpretations of jazz classics and folk melodies from around the world. He has drawn acclaim for his 14 recordings released by Windham Hill, RCA Novus, Tropo Records, 33rd Street and other labels, as well as for his live performances as a soloist and within ensemble settings. James Blackshaw is a London-based guitar prodigy who has released seven albums' worth of mesmerizing instrumental 12-string compositions since 2004. His style is often described as "American primitive guitar" because he has been influenced by the likes of John Fahey and Robbie Basho. He incorporates elements of Indian raga music, improvisation, drone and psychedelia to create extended pieces of immense depth and pristine melody.

Thu 02/04/10 at 8 pm
Chicha Libre & Charlie Chaplin's City Lights (1931, 86 minutes)
Gyan Riley & shorts by Harry Smith
Chicha Libre is a Brooklyn-based group that plays a psychedelic brand of cumbia music invented by the Indians in the Peruvian leg of the Amazon rainforest in the late '60s. Chicha mashes up the melodies of Peru's Native American population, Columbia's cumbia, Afro-Peruvian guitar styles, Cuban guajiras, garage band Farfisa funk and the twangy resonance of American surf and spaghetti Western guitar. It's a hybrid that sounds at once familiar and alien to American ears. Gyan Riley is an equally strong presence in the worlds of classical guitar and contemporary music. He has received commissions from Carnegie Hall, the New York Guitar Festival and the Paul Dresher Ensemble. He has performed throughout 10 European countries and across the U.S., both as a soloist and in ensemble with various artists such as Zakir Hussain, Michael Manring, Dawn Upshaw, the San Francisco Symphony, the Falla Guitar Trio, the World Guitar Ensemble and his father, the composer/pianist/vocalist Terry Riley.

Thu 05/27/10 at 7:30 pm
SIGNAL
Brad Lubman, Conductor
SIGNAL, a large ensemble comprised of some of New York's most gifted and innovative musicians, will perform the WORLD PREMIERE of a new work by Nico Muhly--celebrated as "one of the next great hopes for the future of classical music" by New York Magazine--commissioned by Merkin Concert Hall. The program also includes the AMERICAN PREMIERE of The Corridor by Sir Harrison Birtwistle, one of the most prominent figures in European contemporary music. This piece for two singers and an ensemble explores the climax of the Orpheus myth: his fatal glance back at Eurydice.

Cited by New York Magazine as one of "the people whose ideas, power and sheer will are changing New York," host John Schaefer has for 20 years been offering new ways to hear the ancient language of song. The New Sounds® Live series returns to Merkin Hall in 2010 for another season of adventurous new work.

Wed 02/24/10 at 7:30 pm
Bang on a Can All-Stars
The 2010 People's Commissioning Fund (PCF) Concert
Three world premieres commissioned by the people! New York's electric chamber ensemble Bang on a Can All-Stars take on new works by Nik Bärtsch, Oscar Bettison and Christine Southworth, plus more in their highly anticipated annual celebration at Merkin Hall. The PCF is a radical partnership between artists and audiences to commission works from adventurous composers.
A special edition of WNYC's New Sounds® Live with host John Schaefer.

Thu 05/20/10 at 7:30 pm
New Songs
A program of new approaches to the art song, a form perfected by Schubert and usually restricted to piano and voice. Today, the art song is being stretched and reshaped by rock, jazz and minimalism. Featuring a commissioned work from Elizabeth and the Catapult (pianist Elizabeth Ziman and her band) and a set by singer/pianist Ed Pastorini.