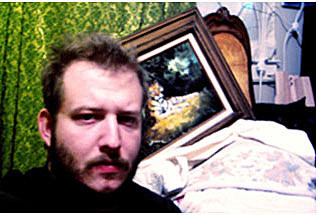 As usual, I realized at the last minute that I haden't posted about an artist I meant to post about. I say it's the last minute because in less than six hours from the time I'm writing this (July 24, 2007), Wisconsin-based (band?) Bon Iver is playing a set at Mercury Lounge at the modest set time of 7:30 pm - he's opening for the Comas. Why can't Porter Wagoner go on later than 8:00 - oh well. More about Bon::

Justin Vernon, former songwriter/singer/guitarist of the much heralded, former Eau Claire, WI based, Raleigh, NC implanted band, DeYarmond Edison, arrives back home with a new project - one that he created over the course of three months this past winter in the woods of Northwestern Wisconsin, isolated from all in his father's hunting cabin with nothing more than a few select microphones and a handful of ancient instruments.

The "Skinny Love" song especially reminds me of Tim Fite. He also channels Chad VanGaalen, Wolf Parade, TV on the Radio, Neil Young, and a few others I can't think of. Mostly I just think it sounds pretty good. Check out the beautiful-sounding MP3s above, and stream Bon Iver's whole album For Emma, Forever Ago right here. More Bon Iver love @ MOKB. See Bon Iver tonight, or on July 26th @ "TBA" in Chicago (no other scheduled tour dates at the moment).