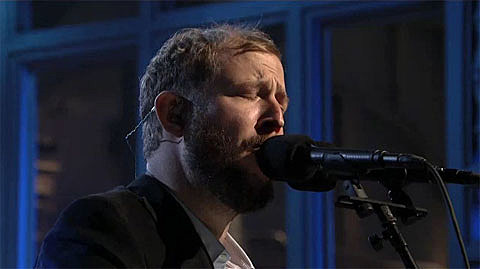 Though we won't see him/them performing at the Grammys ("We wanted to play our music, but were told that we couldn't play. We had to do a collaboration with someone else," Justin said), Bon Iver played two songs off their latest album on Saturday Night Live last night (2/4). Watch both songs below.

"Music was always around the house, we made all the kids take piano lessons," says Justine. "With Justin, he didn't really like the piano all that much, especially when I was teaching him for a while. That did not work out, but he asked if he could quit piano if he went to guitar. From that point on it was him and his guitar always."

Gil says he did what he can to make sure Justin had a place to practice.

"We actually partitioned a room in the basement right below us with sound proof in the wall, so we could actually sit in the room where we're speaking now and watch TV and have a full conversation in spite of the fact that we had nine kids down there with trombones, trumpet, two saxophones, three guitars and a keyboard all plugged in," he says.

Today, Bon Iver is also made up of nine musicians, but the Vernons didn't always know their now 30-year-old son and his band would make is this far.

"We always thought that he had talent but we're his parents, you have to take that with a grain of salt," says Justine.

Watch "At Home With the Vernons" and and both performances from Saturday Night Live, below...