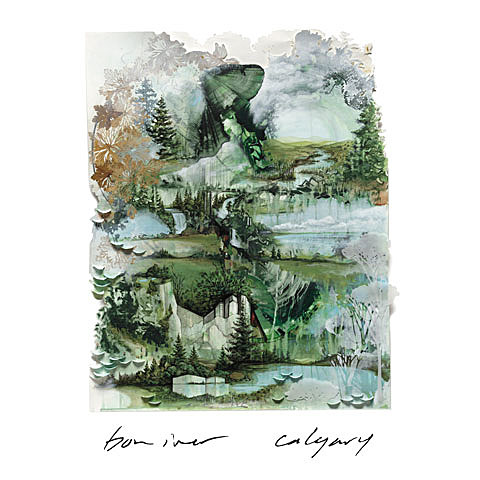 Bon Iver's long anticipated followup to For Emma, Forever Ago comes out Tuesday, June 21 via Jagjaguwar/4AD. Maybe you've got the leak or more-legally streamed it on NPR or even pre-ordered it. If not, or if you just can't get enough of the album, there will be listening parties at tons of record stores all over the country tonight (6/20) and tomorrow (6/21). NYC gets one tonight at Other Music. The store will be playing the album between 6 and 8 PM. They will also have the album and the 12" single of "Calgary" way ahead of its July 5th release date. That's the single cover art above.

The "Calgary" single's b-side is a cover of Bonnie Raitt's "I Can't Make You Love Me" and "Nick of Time", which Justin performed on Fallon. Stream the album version of the Bonnie Raitt cover below. You can grab "Calgary" above, and also watch the video for the track below.

Bon Iver performs on The Colbert Report tonight (6/20) and returns to Fallon on Tuesday (6/21). This time we can assume he'll play a Bon Iver original.

Though Bon Iver will play Colbert and Fallon this week, their headlining tour doesn't start until late July. The Rosebuds, who Bon Iver opened for in 2007, open the entire tour. They'll hit NYC on August 9 at United Palace Theatre and August 10 at Prospect Park. Both NYC shows are sold out.

Meanwhile, Bon Iver member S. Carey's tour with David Bazan hits Bowery Ballroom on Wednesday (6/22). If Justin is still in town, we can assume he'll at least be in the audience to support. Tickets are still available.

Last but not least, as already being hotly discussed in the comments, Pitchfork gave Bon Iver, Bon Iver a 9.5 today (that's .5 less than the Kanye album Justin also appears on).

Video, soundcloud stream and list of record stores below...