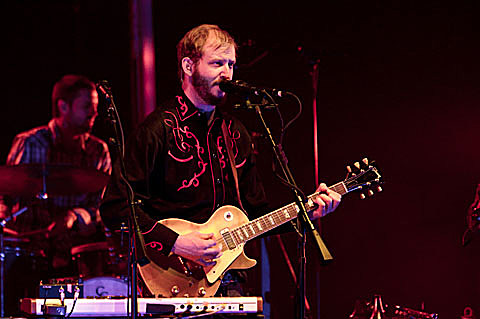 Justin Vernon is currently in NYC, possibly just to "curse the Giants" (who won), or maybe he came to check out SNL musical guest Lana Del Rey (who lost) so that he he can become familiar with the SNL setup because Justin will return to NY next month when Bon Iver is the musical guest on SNL on February 4. They'll be playing songs off of the Grammy-nominated Bon Iver, Bon Iver (which was one of our favorites of 2011).

Later that month they'll head out on an Australian tour. The only North American dates scheduled for Bon Iver as of this post is the sold out Coachella. All dates are listed below.

In related news, Bon Iver were recently confirmed as one of the collaborators on The Flaming Lips' Record Store Day release, which also includes collaborations with Neon Indian, Lightning Bolt, and Prefuse 73, who they put out collaborative EPs with in 2011, in addition to Nick Cave, Death Cab for Cutie, Yoko Ono, Ghostland Observatory, Cloudland Canyon, and more TBA.

Bon Iver's most recent track from Bon Iver, Bon Iver to be chosen as a single is "Towers" and the single b/w "Bruise Orange (Chain of Sorrow)" (John Prine cover) comes out March 6 via Jagjaguwar. You can listen to both of those songs below.