Bongripper in Chicago in 2011 (more by Carmelo Espanola) 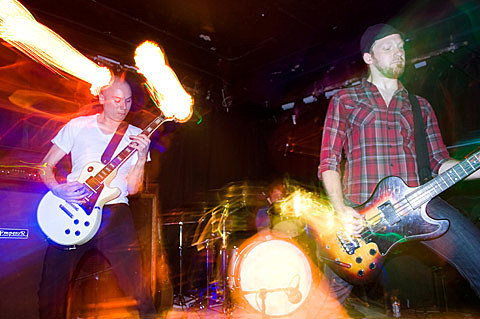 Chicago's finest and very reliable purveyors of debilitatingly stoned metal Bongripper have still never played NYC (they almost did in 2011), but assuming all goes well this time, they'll make a very exciting first-ever appearance here on December 6 at Saint Vitus. They'll be joined by NYC's Hasj and Philadelphia's Hound (mems Ted Leo + the Pharmacists, None More Black). Tickets are on sale now.

The Vitus show is the only Bongripper show that's currently announced besides a couple other European festival dates on the horizon. All known dates are listed, along with a video of Bongripper playing live at the Logan Square monument in Chicago as part of this summer's Gnar Fest, below...