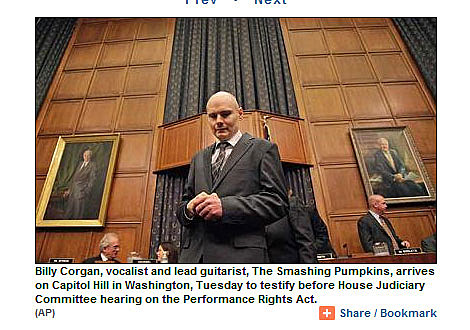 "Yeah, we're getting really good at mergers and acquisitions at this point, so we've had a lot of companies that we've acquired and had to integrate. But we're working on our ability to do this much quicker. We have to keep some of these systems distributed; sometimes you just can't directly integrate them. You've got to keep running them to better integrate them into the overall enterprise."
[Joe Manna, CIO of Live Nation]

"Mr. Billy Corgan was busy in Washington today, first appearing before the House Committee on the Judiciary in a hearing on the Performance Rights Act, then delivering a letter in support of the controversial Ticketmaster/Live Nation merger. You can read Billy's words to the committee here, but essentially Corgan told congressional leaders that radio should pay performers, not just songwriters, for tracks played." [Stereogum]

"Bono said he had no opinion on the mega-merger." [Chicago Sun Times]

"I had a long conversation with a promoter who told me that with regard to a show he was promoting, Ticketmaster was guaranteeing the secondary market for the act." [Bob Lefsetz]

"No Doubt is sticking it to Ticketmaster by selling 10% of the tickets for its North American Tour directly to fans. The goal, according to Jim Guerinot, No Doubt's manager, is for fan club members to buy tickets instead of 2nd party distributors such as TicketNow, the legal scalping division of Ticketmaster. This is the same problem Bruce Springsteen and his fans have been pissed about for weeks." [New York Press]

"AEG CEO Tim Leiweke slammed the proposed Live Nation, Ticketmaster merger, saying that it is 'not good for the industry.'" [The Busines Insider]

"Come on! Only Gene Simmons got into this business for the money. The rest of you were enraptured by the music. Can't you get the public on the same page? Can't you turn everybody into a club rat? Can't we get everybody to go out and see live music on a regular basis? Or do we have to wait until the labels fail, independent promoters are broken and every ticket is sold on TicketsNow and StubHub?" [Bob Lefsetz]