Bono at the Meadowlands in 2011 (more by Greg Cristman) 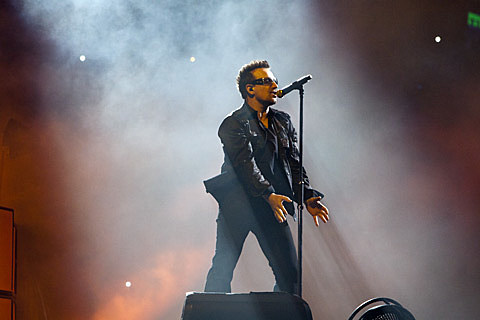 When Bono's cycling accident in Central Park was first reported, it didn't sound terribly serious. U2 had posted, "Bono has injured his arm in a cycling spill in Central Park and requires some surgery to repair it. We're sure he'll make a full recovery soon, so we'll be back!," which seemed like a speedy recovery was on the way. However, an update from Rolling Stone reveals otherwise. Bono was reportedly in surgery for five hours, and...

The singer suffered numerous serious injuries, including a "facial fracture involving the orbit of his eye," three separate fractures of his left shoulder blade and a fracture of his left humerus bone in his upper arm. The latter injury was particularly damaging, with the bone shattering in six different places and tearing through his skin.

According to orthopedic trauma surgeon Dean Lorich, MD, "[Bono] was taken emergently to the operating room...where the elbow was washed out and debrided, a nerve trapped in the break was moved and the bone was repaired with three metal plates and 18 screws." On Monday, Bono underwent a second surgery to repair a fractured left pinky finger.

In order to recover, Bono will apparently "require intensive and progressive therapy," but they do expect a full recovery. Get well soon Bono.