Boogarins at Burgermania at SXSW 2014 (photo by Ann Alva Wieding) 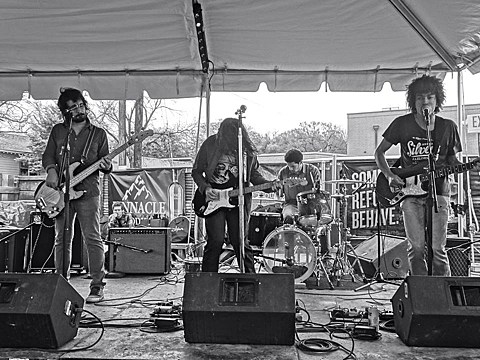 Brazilian rock band Boogarins are making their way around North America, and while they're here they'll come to NYC to do a free admission, all-ages in-store performance at Other Music this Monday (3/24) at 8PM. Other Music holds a limited capacity, so make sure you get there before it fills up.

The band will be supporting their debut album, As Plantas Que Curam, a sweet blend of poppy melodies with psychedelic guitar leads, which came out last year on the record store's namesake label, Other Music Recording Company. Their lyrics are entirely in Portuguese, but language barriers aren't important when discussing their blissful, trippy rock tunes.

As discussed, the next day, they will play Glasslands (3/25) in support of Vertical Scratchers (John Schmersal of Brainiac/Enon's new band). Tickets for that show are still available.

The band is also playing Burgerama this weekend, Psych Fest in May, and Primavera in June, among others. Updated dates are listed, with a video, below...