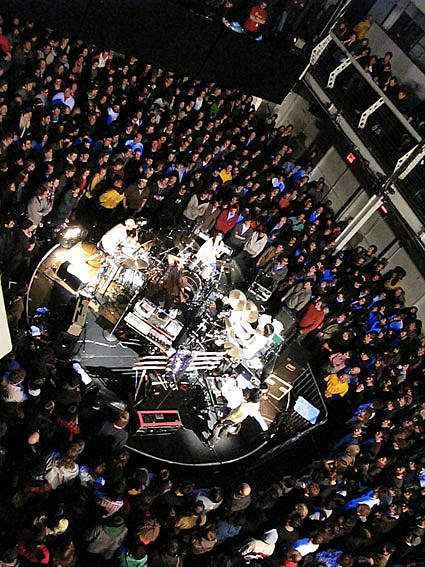 Wearing a cast. That's the how Yamantaka Eye brought the tribal noise of the Boredoms at Terminal 5 last night. Most bands are lucky to have a guy with 1/3 of the energy.... Eye did it with one foot. Opening the show "playing" a strange synth contained in two orbs of light, the Boredoms powered through a seemingly endless crescendo of thundering drums and power electronics. Alternating between a squelching electronics/sampler/keyboard setup and his massive seven-neck guitar (used as a PERCUSSIVE instrument), Yamantaka Eye barked, yelped and chanted over the triple drum attack of Muneomi Senju, Yojiro, Yoshimi P-We. It was majestic and primal all at once. 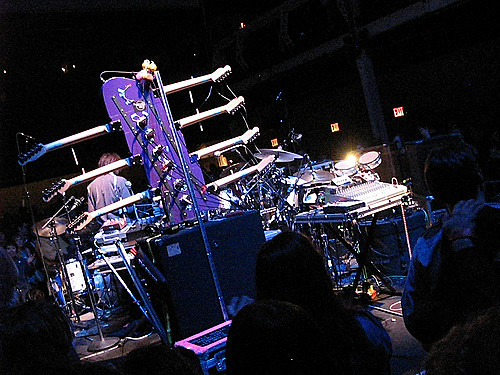 With the stage situated in the middle of the floor (the show was billed as "In The Round"), close to every view was a decent one... and I know I changed mine quite a few times.

I got there later and was told that Soft Circle (aka Hisham Bharoocha of ex-Black Dice fame) didn't make it, though someone someone else is saying he just played really early. Did anyone check out Black Pus (aka Brian Chippendale from Lightning Bolt)?

Boredoms are at Other Music tonight (March 31). Black Pus are at Market Hotel on Tuesday (April 1). A (video) taste of last night below....

One of my favorite things about the night was watching a roadie as he replaced, clipped, tuned the broken and intact strings, and placed capos (were those dowel rods?) on Yamantaka's seven neck guitar. It was almost a full time job. Check out Yamantaka Eye as he hammers down on the seven-neck.