photo: Yoshimio (right) at Station to Station in 2013 (more by Lukas Hodge) 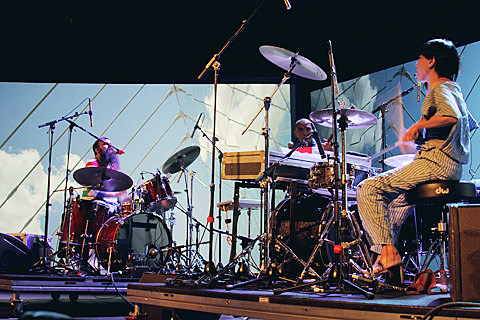 Experimental musician Yoshimio of Boredoms, OOIOO, Free Kitten and more, has five different collaborative NYC shows this month, starting tonight (12/9). Tonight's show happens at Roulette with Twindrum, the dual drum project she formed with no wave legend Ikue Mori in 2013. It's their first North American show since that year. Tickets are still available.

The next one is on Friday (12/11) at Trans-Pecos, where she'll play a duo set with Robert Aiki Aubrey Lowe, who's a member of Om and plays solo as Lichens. Alex Macarte and Jeremy Hyman are opening. Tickets are available.

On Sunday (12/13), she teams up with Ryan Sawyer, Hisham Bharoocha and Shahzad Ismaly for a show at Max Fish (now at 120 Orchard St). Opening is Highlife (Doug Shaw) and DJ Dutch E Germ. Tickets at door.

Lastly, she plays Chuck Bettis' residency at The Stone. She plays the 8 PM set on Tuesday (12/15) as a duo with Chuck. Brian Chase and others play the 10 PM set that day. Tickets at door.

Stream one of Yoshimio and Yuka Honda's collaborative songs below...