this is the belt he was wearing... scary! 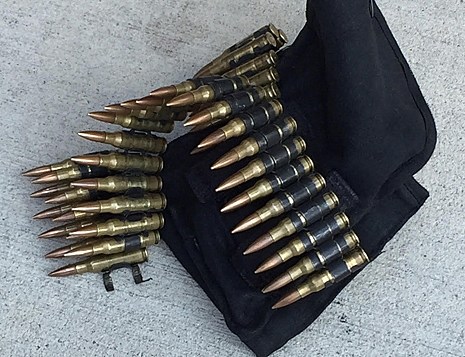 At about 4:20 PM on Friday July 10, 2015, officers assigned to District D-14 (Brighton) responded to a call for a person with a gun on an MBTA bus in the area of Cambridge and Harvard Streets. Officers learned that the driver had pulled the bus over as passengers began calling 911 when a male suspect boarded the bus with what appeared to be military grade ammunition strapped around his waist. The driver stated that the passengers were in a panic, fearing that the suspect was about to pull out a weapon. The suspect, later identified as Kevin Young, 26, of Watertown, exited the bus and was stopped by police on Penniman Road at which time it was discovered that the ammunition was fake. Officers recovered 69 replica bullets in all. The suspect was wearing what was described as spiked fighting gloves and spiked leather bracelets.

The suspect was placed in custody and will appear in Brighton District Court on charges of Unlawful Possession of Ammunition, Unlawfully Carried Dangerous Weapon and Disorderly Conduct.

Perhaps not surprisingly -- considering, as the District Attorney put it, the cartridges on his belt "could not and weren't intended to be fired" -- the charges were dropped. As Dangerous Minds points out, the man in question appears to be a member of a crust band called Hexxus, who say their demo is "coming really soon." We promise this isn't a Hard Times post.